Looking back on the past couple of years, it seems a growing number of restaurants outside of the quick-service space, namely fast-casual and full-service operations, continue to add drive-thru service to their offerings.

At the same time, QSRs seem to keep coming up with new ways to take drive-thru service to the next level by adding additional lanes to accommodate third-party delivery and online ordering, developing new store designs and more. For QSRs upping the drive-thru ante, so to speak, may have been a natural transition. The same cannot be said for many fast-casual and full-service operators looking to cash in on off-premises business.

Looking at a variety of projects our company has compiled during the past three to four years, it remains clear that when it comes to offering drive-thru service speed matters. It does not matter if the concept’s roots are in fast casual or full service. A silent contract exists between the concept and the customer when a drive-thru becomes part of the equation. In the mind of the consumer service needs to be faster than concepts without a drive-thru. That’s because upon seeing a drive-thru, a customer equates this feature with convenience and speed. Now, in the case of a fast casual or full-service restaurant adding drive-thru service, the speed need not be on par with QSRs, but it cannot be the same speed as dine-in service either. Fast Casual concepts whose speed more closely resembles QSR-type speed have yielded the most successful in the introduction of their drive-thru extensions.

Below is some data for two fast-casual/casual-dine concepts with similar menus. The major distinction between the two concepts is that one has its processes, procedures, and cooking platforms faster than the other; but not quite QSR fast because they are not of that category. The faster concept just has more of a dish-up opportunity than the other. 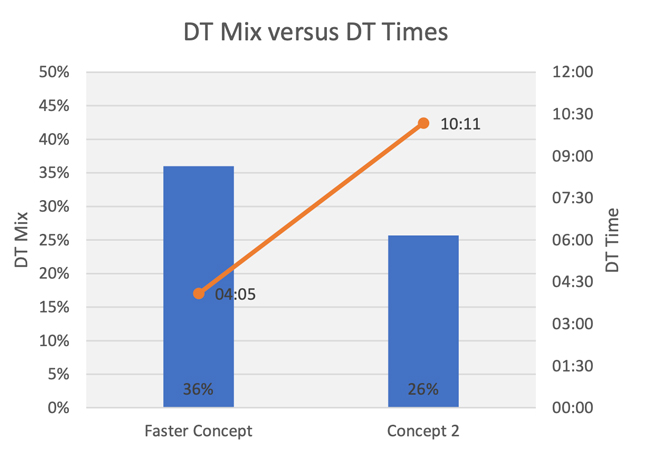 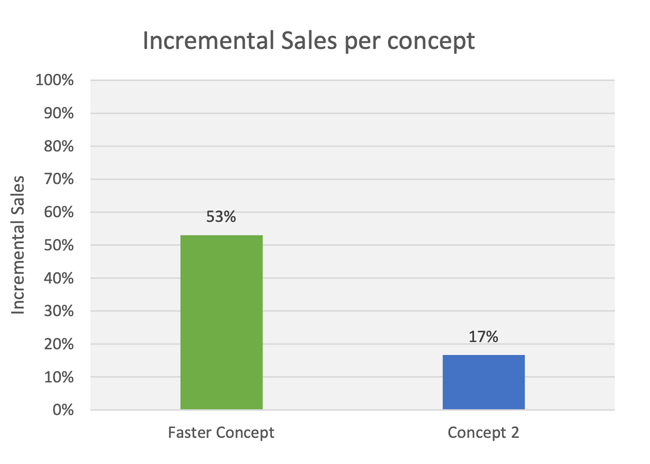 From the data above, one can infer that the quicker the drive-thru can move cars through, the higher mix of drive-thru the concept has. More importantly, the concept that is faster in the drive-thru experienced higher incremental sales after the introduction of the drive-thru offering. Keep in mind, these two concepts offer similar menus. The data shows the faster concept was better suited for drive-thru because it yielded the noticeable gains the other concept yet to realize.

This does not suggest the second concept cannot eventually reach the same case study results, but rather the faster concept was better prepared to meet the terms of the silent contract that offering drive-thru service implies. This leads us to the fundamental questions that a concept should ask before installing a drive-thru: do my menu, processes, procedures, and platforms facilitate the necessary differentiating speed to infringe onto the drive-thru space, for my category? Again, not to be confused with QSR speeds, but forcing every car to wait more than 10 minutes to wait for their food in the drive-thru, when the drive-thru mix is less than 33% of business, has not yielded quite the success in drive-thru integration. In such cases, other forms of off-premises should be explored, such as curbside or a pickup window versus an actual drive-thru system.

Concept two can eventually realize some of the success faster concept has seen, but before doing so, proper design needs to build into the drive-thru offering. Initiatives that resemble faster cook and assembly would be a step in the right direction. Still, concepts should really consider the “silent contract” of convenience and speed that drive-thru implies before installing them for their concept.