A certain entrepreneurial spirit has long shaped the food and foodservice industries. But it’s one thing to have a vision for a restaurant or a food-related business and another to have the infrastructure to make one’s hopes and dreams a reality.

That’s where Amped comes into play. Amped provides companies, from startups to well-established businesses, the opportunity to rent kitchen space. But unlike other shared kitchen concepts where the customer may have to reserve time in the kitchen, the operators renting from Amped have access to their spaces 24/7. 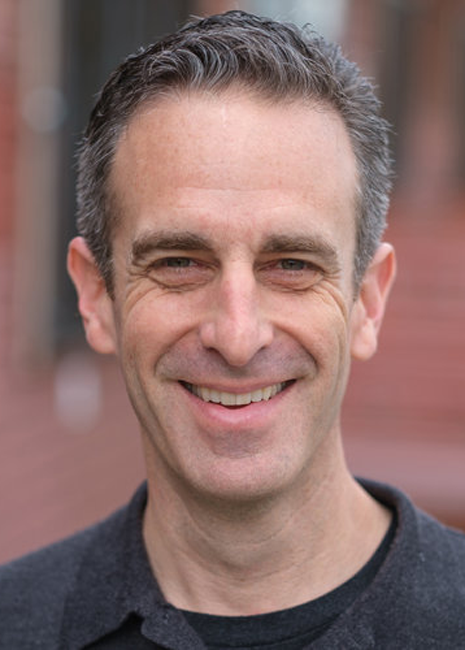 Mott Smith“The typical growth trajectory for a small business is they have a family recipe, and it becomes a hit at a farmer’s market. Then a life-changing order comes in and they must scale quickly. So, they look for a contract manufacturer and sometimes they have to let that order go. Or they turn to a company like Amped who can help,” says co-founder Mott Smith. “The segment we are really serving are food companies that are too big for an incubator and established companies launching a new product that does not yet have its legs. At a place like Amped you can start defining and refining the concept and actually do the production. We are also working with companies that provide meal solutions and restaurants that need central commissary kitchens. So, if you have a restaurant with five locations and want to maximize the kitchen space onsite, you can come to Amped to prepare them and ship them to your operations.” 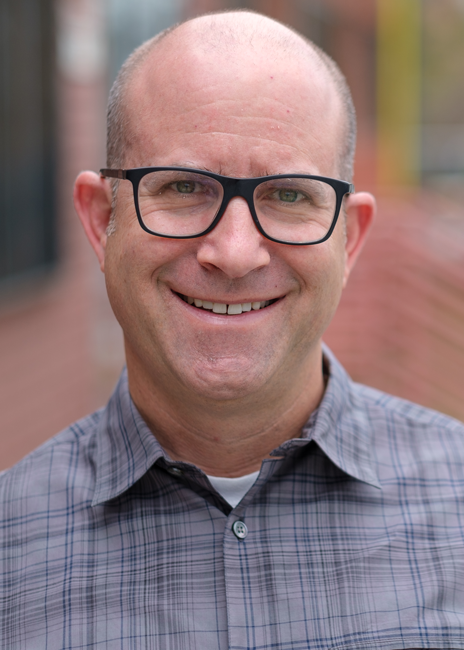 Brian AlbertWhile Amped does not have an ideal mix of customers it targets for its locations, the company feels it is important to have a mix, says co-founder Brian Albert. “This is a community,” he says. “Tenants often work together. They share ideas and even buy from each other. They are part of a richly diverse community of individual food makers and that makes a difference.”

Given all the buzz surrounding ghost kitchens now, it might be easy to compare Amped with them. Smith points out some significant differences, though. For example, in ghost kitchens things can get chaotic. Because this is a more production-based facility it tends not to be as chaotic as ghost kitchens, he says. “On paper they may look similar to what we do at Amped kitchens, but they are not,” he says. “Most of our traffic in and out of the building is with 18-wheel trucks. In ghost kitchens its smaller delivery vehicles.”

Each kitchen space at Amped comes with a hood, floor trough and hand sink. Tenants are free to source equipment from suppliers of their choosing. Before they move in, Amped asks tenants to supply spec sheets just to make sure the operator’s space has the appropriate gas, electricity and water flowing to its area. In the event a tenant might require more electricity, for example, Amped will work with them to make it happen.

Amped can get operators up and running quickly from the time they sign the lease. Getting approval from local governments, though, is something completely different. In Chicago, for example, tenants will require a special shared space operating permit that can take four to six weeks to receive. Tenants will also need to have a food manager sanitation certificate as well as their own insurance. Operators can continue to move into and set up their space as they sort out all of these important details.

The Chicago facility also includes changing rooms for staff, locker rooms as well as meeting, office and conference space. There are also several shared warewashing areas that include a three-compartment sink and a high-temp dish machine.

Amped tenants can rent space in the facility’s walk-in cooler, freezer and dry storage areas. There’s also a test kitchen area with some cooking equipment that tenants can rent on an hourly basis to try out new ideas. This last space is getting lots of use, according to Tony Lio, general manager of Amped’s Chicago location. 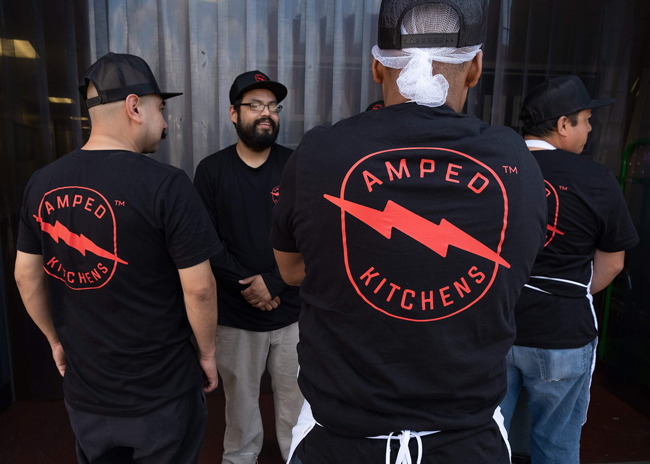 There’s also a USDA office on-premises, which is a necessity for food companies. “If you are doing wholesale food with meat, you are required by law to be inspected by the USDA. It’s often a many months-long processes and you have to satisfy them you are in the correct facility and have the correct processes,” Smith says. “And you have to have a USDA office with a specific lock on the door and file cabinet. We know that and take care of that for you. It helps our tenants take those opportunities when they arise.”

In addition, Amped staff will man the loading docks. So, if a tenant receives a delivery someone from the Amped team will take the items and place them in their proper place, be it the tenant’s kitchen or if they have walk-in space.

When clients need service or to replace something that Amped provides, they can do so via the company’s app and website. In Chicago, at least for now, those tools are not getting as much use given that Lio and his team continue to work closely with the tenants. “It’s a combination of service and operational support, so you have to have a presence,” Lio says.

All these new features did not come about by accident. They are the result of carefully applying the lessons learned in opening the two Amped locations in Los Angeles. “Chicago is Amped Kitchens’ version 3.0. The other locations are great, but we learned a lot about how our tenants use storage, access the loading docks and more,” Smith says. “It’s, by far, our largest facility. One lesson we’ve learned is no matter how much storage you build you will need more. Right after kitchen space and permits, access to storage is the most important thing to our tenants.”

Albert agrees and adds, “Our first two iterations were great but there were efficiencies in layout we were able to achieve in Chicago. We learned our tenants can grow a lot in their existing spaces because they can add hours, etc. So, the pinch comes when they need extra space to prepare to ship their product. And we have packing rooms in our spaces to do exactly that.” 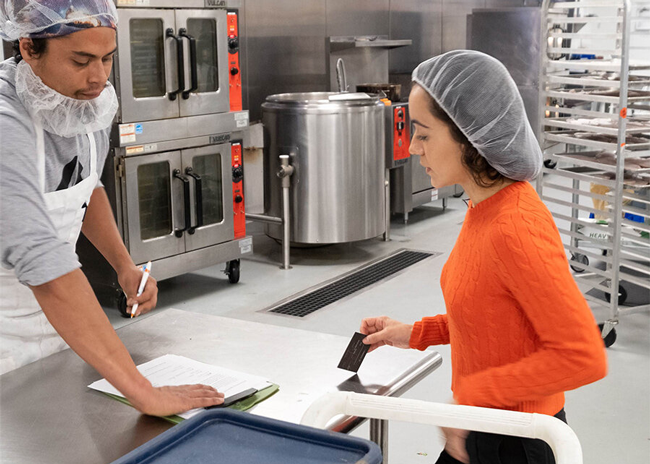 The 117,000-square-foot Chicago location previously served as a facility that manufactured Zenith televisions and was the right size for Amped. Other area attributes Amped considers includes proximity to public transportation and whether the trucking lines can access the facility. “We prefer older style industrial buildings with some character that we can breathe some new life into them,” Albert says. “Being in an area that has access to a workforce, and that’s one reason we love the area in Chicago. One of our largest tenants there is able to hire people from nearby. That’s a really big deal.”

Their approach to Amped’s development is a nod to both Albert and Smith’s past as real estate developers. “Our passion has been remaking old buildings breathing life into neighborhoods and helping businesses at the lower level of the economic ladder,” Smith says. “Part of our ethic is that we really like helping unlock the potential communities. A lot of people think that means getting rid of the existing communities. For us that means getting more out of the existing community. That means bringing in companies who want to hire locally and creating jobs for people, so they don’t have to commute too far.”

When the recession hit in 2007, the duo realized they needed to make a change. “We have always been passionate about food and creative businesses,” Smith says. “That’s when the light bulb went off for us. There’s a lot of food companies that could be growing but it’s complicated to get a licensed solution. So, we set out to create a solution for that.”

Of course, the road to Chicago was a long one and it took Amped roughly six years to get there. “Chicago’s the country’s greatest food city. It’s a culinary whirlwind. The quality and creativity of what’s being made in Chicago always blew us away,” Smith says. “And after we opened our first location in L.A. back in 2015, we got a call from the Mayor’s Office of Economic Development saying we need something like you here.”

Where’s the next stop for Amped? “We believe everywhere there is a sizable population center there are people eating and cooking food for those people. So, we have not yet found a part of the country where don’t think this will work,” Smith says. “We like to be the place where a mom and pop can start their business and a national company can start a new market. Anyone that’s passionate about food and quality is welcome here.”