As much as honesty, integrity and family are among the defining traits of Tom Schrack Sr., so too is his generosity. From local nonprofit organizations to his church to keeping the memories of two former Hockenbergs employees alive, Schrack's charitable nature is seemingly limitless. 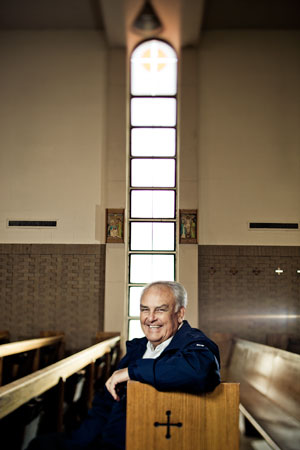 Tom Schrack Sr. and his wife Mary have been very involved with Omaha’s St. Bernadette Parish since its inception in 1963. Currently Schrack is helping the parish raise the funding needed to install new stained glass windows in the church

"He enjoys giving, no matter the amount. So when someone asks, he gives," says daughter Mary Parr. "It is not a duty or a chore for him. I hope that's something he's passed along to me and it is definitely a trait I see in my children.

"My mom jokes that he gets tons of mail from all these small charities that he donates to," Mary Parr adds. "They might be little things but he gives to many little things because they are all important to him."

If there is one charitable endeavor that's very near and dear to Schrack's heart it is the Griffin-Becker Golf Outing. Now in its twelfth year, the event pays tribute to Charlie Becker and Dick Griffin, a pair of longtime Hockenbergs' employees who both passed away from cancer. To honor their memories Hockenbergs hosts a golf outing to raise money for the American Cancer Society. Over the years, the event has grown from 90 golfers to more than 200 and, most importantly, has raised in excess of $180,000 for cancer research.

The day before actually playing golf, participants congregate at the Schrack family cabin to play horseshoes and cards and enjoy some barbeque. And the next day they hit the golf course. "The reps, manufacturers and customers all come in for this and they really enjoy it," Mary Parr says.

Schrack does his best to extend this kind of charity to those customers that need it, too. For example, a pastor of an area church was looking to buy some chairs off the Hockenbergs showroom floor but they cost twice as much as they could afford to spend. Schrack stepped in and offered the chairs to them for half the price because he felt it was the right thing to do. "They were just tickled to death and it was really no skin off our back," Schrack says.

"We want to help. The boys often ask why should we do that? Well, why not?" Schrack asks. "We get our income from the community so we should give back. We donate to the churches and homeless organizations and do things like that. It's part of the business and what any good company should do. It is something I want the kids to continue doing."

And it is an aspect of the business about which Schrack is very passionate. "We had a management meeting a couple of months ago and I told the guys that they are cheapskates," he says. "You don't donate enough money. And it's not just money. It can be dead stock."

Of course, Schrack's ties to the church are far deeper than one encounter with a pastor. He and his family have been very involved with their parish, St. Bernadette's, since its inception in1963. "When our parish first started, my wife Mary and I put in a lot of work," Schrack says. "We could not donate a lot of money back then so we donated our time."

And Schrack remains very active within St. Bernadette's to this day, working on a fund-raising effort to have stained glass windows installed in the church and occasionally counting the Sunday collection or even reading at mass. Just this spring, Schrack and his family officially opened Dave and Don Schrack Field, a baseball diamond on the St. Bernadette's property that the school will use for girls' softball, little league games and even a men's 16-inch softball league.