Waste Management Series: A Tale of Two Recoveries: Energy Recovery at the Kitchen and Local Level

When it comes to the phrase “energy recovery,” most of us likely think of capturing energy from equipment, like dishwashers. While that’s certainly an important part of overall waste management, the other type of energy recovery as it relates to waste comes from capturing gasses from anaerobic digester (AD) systems and even traditional landfills that can potentially convert into energy.

AD systems work by first grinding food waste and other organic material. After balancing the mixture for pH, and sometimes pasteurizing it, the “meal” is pumped to another tank where microbes break down particles first in an aerobic (with oxygen) process of fermentation. The anaerobic digestion process follows next, whereby microbes break the organic acids into methane, carbon dioxide and hydrogen gas. To capture that energy, the resulting “biogas” travels from the anaerobic tank to the generating engine where it is combusted to create electricity and heat. That electricity can then be sold to power companies or transferred to on-site heating plants. In some cases, biogas from AD systems can even be recovered for use as vehicle fuel. The broken-down food particles become a slurry that’s dehydrated for use as a soil amendment. 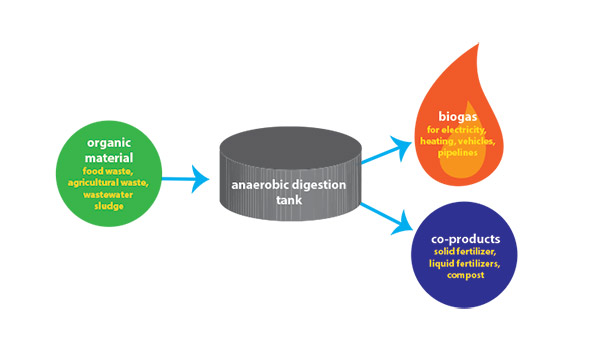 Smaller AD systems might stop at the slurry process, whereby a waste hauler would pick up the liquid material and process it into a dehydrated soil amendment at a different location.

“Compost and AD systems have traditionally been used for yard and agricultural waste, but the use of them for food waste has been receiving a lot more attention in the last few years,” says Anne Germain, director of waste and recycling at the National Waste and Recycling Association in Arlington, Va.

In foodservice, the latter type of energy recovery still has a way to go before it’s more commonplace. Larger-scale agricultural operations, farms, some food manufacturers and even commercial breweries have the space and funds to afford an AD system. “As some of these AD systems get smaller and economies of scale improve, we may see more institutions investing in the technology,” Germain says. More likely, the smaller AD system, used perhaps by a healthcare facility or large university, will stop short at the slurry-making process and require a waste hauler to retrieve it for further processing into a soil amendment. There might also need to be a partnership with a local power company to transfer the generated electricity for credits or some re-use.

According to ReFED’s The Roadmap to Reduce Waste by 20 Percent report, more than 2,000 sites in the U.S. utilize ADs, primarily in agricultural, wastewater and urban settings, but only 40 to 50 are dedicated to processing food scraps today.

Biogas, the primary economic byproduct, consists of roughly 60 percent methane and can be minimally treated and used to generate heat on-site, offsetting natural gas. It can also be treated to remove contaminants and fed into a natural gas pipeline and treated and converted to compressed natural gas (CNG) as a renewable vehicle fuel, or converted to electricity and heat with a combined heat and power (CHP) system.

“I believe we’re still a few years away from more widespread use of AD systems but people are moving in this direction and everything is still quite policy driven,” says Germain.

Some waste-to-energy facilities in the Northeast are able to capture energy from on-site incinerators, but air pollution potential still remains a concern among certain camps, Germain adds. The Environmental Protection Agency requires landfills above a certain size to capture methane gas, but not all facilities actually convert that gas into electricity.

There’s plenty of room to grow when it comes to energy recovery at waste facilities and through AD systems. But as more players set their sights toward cutting down on food waste — and on energy use — things could take a turn. In the next few years, we might just start seeing more of those AD vessels on campuses nationwide. It won’t be easy, and will require more funding and scalability, Germain says, but it’s not impossible.

Vermont Tech has invested in a community AD system to transform food and farm manure into renewable heat for the college and recycled nutrients for the farming community.

The project, which began five years ago, received funding through multiple organizations, including the U.S. Department of Energy and the Vermont State Colleges System. The ultimate goal is to divert all organic materials from landfills and support sustainable, renewable energy.

The AD system uses a two-stage, mixed substrate technology from Europe to produce renewable electricity that it resells, renewable heat for the college, and recycled nutrients for the local farming community. Vermont Tech partnered with the Vermont Sustainable Jobs Fund on the project; the Vermont Environmental Consortium and the Central Vermont Solid Waste District also played instrumental roles in early phases.

“We are all increasingly concerned with energy prices, energy security and the availability of energy,” Vermont Tech execs said in a published statement. “We all want to protect our agricultural heritage and see farming continue to be an important part of our working landscape and our economy. At Vermont Tech, we want to be part of the solution.”

AD is a natural biological process used by ruminant animals like cattle, goats and sheep to extract energy from food. The AD facility uses the same natural biological process that occurs in the four stomachs of a cow. While cows use feed to produce milk, meat and more cows, this facility uses dairy manure and food ‘residuals’ to produce electricity and heat for an energy transformation company and the campus. Like a cow, this anaerobic digestion facility also produces manure-like material that can become a natural, pesticide-free crop fertilizer.

Some newer model dishwashers are able to plumb to the cold-water supply line and use waste heat recovery to preheat the supply water, thereby bypassing the hot water distribution system entirely.

A refrigerant heat recovery system (RHRS) works by harvesting the super heat that would otherwise be rejected by the condenser in a refrigeration cycle. Facilities can add a RHRS to walk-in coolers and freezers, ice machines and air-conditioning systems.

Heat can also be captured off of cooking equipment via heat exchangers affixed to the exhaust hood. Grease-laden steam coming off grills can be captured in the exhaust hood after it’s filtered. That energy can then be pumped into a water heater or air handler to cut down on overall energy consumption and costs.