In support of its new brand positioning, CiCis plans to roll out a new restaurant prototype design, with a reimaged location opening during the first quarter of 2016 and a new location sporting the new design opening in the second quarter.

CiCis has dropped the word “pizza” from its name to better emphasize the breadth of its menu offerings. To support the company’s new direction, its latest prototype design features an entirely new color palette, graphics and restaurant layout. CiCis worked with Sterling Rice Group of Boulder, Colo., to develop the new brand position and prototype design, and Back Lot Productions of Atlanta to translate the design into a live restaurant. More than 20 franchise-owned restaurants and at least 10 corporate-owned locations will be built following the new prototype design in 2016-17. 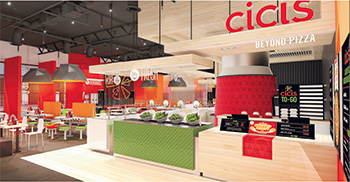