You could argue that it’s the most important station in any kitchen, but the expediting station is often given the least consideration. Every single meal in any restaurant or foodservice operation flows through here, increasing the importance that the station be placed correctly, remain organized and include an ergonomic design.

Expediting stations in quick-serve, fast-casual and full-service restaurants each have a slightly different goal. The overarching purpose remains quality control and accuracy, but from there, it differs. In a QSR or fast-casual restaurant, an expediting station serves as the place staff finish, package or place products on a tray; in fine dining, culinary staff verify dishes to make sure they contain everything, while adding missing items and garnishes. 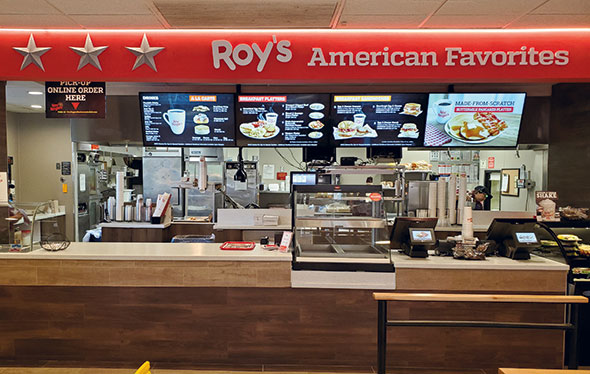 Kitchen designers, Martinez says, should ensure the busiest cooking stations are not at the end of the line; otherwise, expediters have difficulty finding the food, unless it’s coming to them ready to go. The optimal location for an expediting station, he says, is a place where all production employees have easy and efficient access to it.

Ideally, says Alex Diaz, senior consultant with The Restaurant Group consulting firm in Miami, an expediting station runs the length of a cookline, so the expediter doesn’t have to move much to reach any cook station. “It should take two to three steps to get anything done,” he points out. 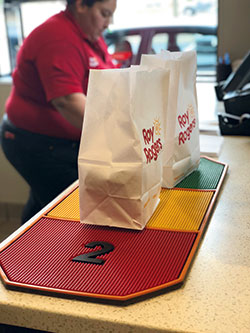 Expediters at Roy Rogers place completed orders on a 2-1-Go Mat, which provides a staging spot for orders.Many chains rethink efficiencies as they expand operations, something currently in the mix at Roy Rogers as the Frederick, Md.-based Western-themed QSR chain expands through the mid-Atlantic. Efficiency improvements for the 48-unit chain include adding new drive-thru staging areas, drive-thru order carts and a redesigned drive-thru station layout.

Roy Rogers executives view its drive-thru business as an area ripe for growth. Currently, drive-thru sales total 48 percent of sales — less than the industry average of 60 percent, says Jeremy Biser, executive vice president for the chain. “If I can pick up efficiencies at every station, I’m going to be able to get more cars per hour through the drive-thru, or more guests per hour in peak times through the front line, so our upside on sales is huge,” he says.

In QSRs, position expediting stations between the drive-thru window and the front counter pickup area, says Biser. And the flow of the kitchen has to go in one direction, toward the expediting station. “The fewer steps people take, the faster they can be,” he says. Right next to the station is the fry station, so expediters can add fries last “since it’s your highest volume item,” he notes.

Roy Rogers’ expediting station is about two feet long. “If it were bigger, people would find something to put on it,” Biser says. Avoiding clutter at the station supports the “speed is king” philosophy.

In a few locations, Roy Rogers couldn’t rebuild the expediting stations due to physical constraints of the buildings — it would have been cost-prohibitive to move beams, etc. — so instead, the chain opted to use 2-foot-wide carts by the drive-thrus at those locations. A staging mat for the drive-thru sits on top of these carts, which is where the expediter places completed orders; below are cubbies containing everything needed, such as condiments and napkins.

At the same time, the drive-thru beverage area moved behind the cashier, allowing the order taker to pour beverages when not taking orders. At busy times, another employee might work as the beverage expediter.

Roy Rogers also moved the drive-thru ticket printer onto the expediting station. “That saves about five seconds, which adds up and means you can get several more cars through,” Biser says.

To See or Not to See?

Expediting stations in a traditional, closed kitchen can be visible to diners or hidden. Typically, they’re visible in QSR operations and hidden in full-service operations.

Visible stations are a good thing, Martinez believes, “since it can help efficiency of the employees and drive a level of dynamics and vibrancy — energy — for both employees and customers.” Also, he adds, if managers are expediting, visible expediting stations allow them to simultaneously monitor the kitchen and the dining room. The possible disadvantages, he says, are noise and a potentially messy line of sight to a kitchen.

With three open kitchens in 84 Hospitality’s restaurant portfolio, Rachel Cope, founder and CEO, finds the open concept drives the placement of the expediting station. It needs to be in a spot “where it can be the eyes and ears of the kitchen, and everyone can see the line, and be able to communicate with staff members without too much movement,” she says. “We position the expo line in a location that’s out of the way of the guest but is best for receiving items from all kitchen stations and easy for servers to grab and go.” Based in Oklahoma City, 84 Hospitality’s restaurant concepts include Empire Slice House, Gorõ Ramen, Revolución! Mexican For All and Gun Izakaya. 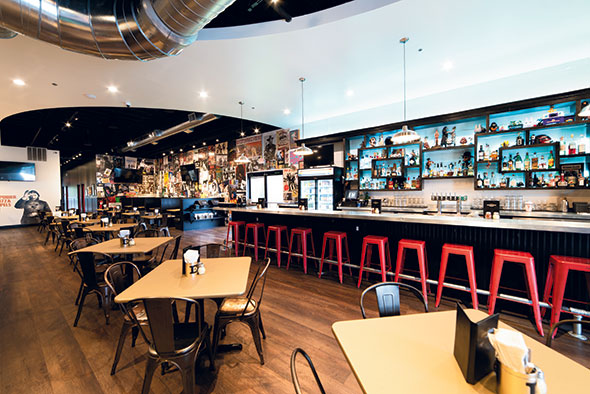 Expo lines at restaurants in 84 Hospitality’s portfolio, such as this Empire Steak House location, are designed to be out of the way of guests.

Two expediters are not uncommon during peak times at 84 Hospitality’s restaurants and can be standard in higher-volume locations. The two-person flow means one dedicated staffer does not leave the expediting station, and the other expeditor serves as a food runner, providing an extra set of hands to grab food and other items.

A window cutout separates back-of-the-house expediting stations from the kitchen; staff hand plates over the counter.

The expediting station itself should be very organized, says Martinez. The most commonly used items should be the easiest for the expediter to grab, and everything should be as close as possible. “Moving is time; time is labor and quality,” he says. “So, minimize movement and maximize human ergonomics. You have to think about height, reaches, the line of sight.” He recommends that operators opening a new restaurant do a motion study analysis to see exactly what works best.

It’s important to prevent bottlenecks around expediting stations, Martinez says, and a simple fix is often having an expediting station that can accommodate more than one expediter. And don’t forget information flow, he points out, explaining that the expediting station should not, at any time, receive too many tickets. “Only two or three orders are important. Our brains can only process so many things; the rest is clutter and overwhelming.”

An expediting station works like a mini assembly line, Biser says. “You have to be able to build each order as quickly as possible, with as few errors as possible and without wasting anything.” Before Roy Rogers’ redesign, cups were often dropping to the floor. Now, the cup dispenser cylinders are built into the millwork, and expediters pull cups up, instead of down, to release them and prevent falls.

In stores where Roy Rogers’ expediting stations were completely overhauled, cubbies were added for condiments. They’re plastic containers built for easy access, and they’re stackable. “It’s not just about the number of steps, it’s also about reducing turning and bending and saving a second or two,” Biser explains. “We’ve put more at waist height that they can grab without moving.”

The Question of Off-Premises

With the growth of off-premises dining, should operators include a second expediting station? Typically, that’s not a good idea, given that it requires a second cookline and all the equipment that goes along with it, Diaz says.

Burger Punk, a new QSR concept from 84 Hospitality, is small, at 1,500 square feet, and takeout orders are sent from the expediting station to a warming area to await pickup from a third-party delivery company. Eat-in orders go directly to tables.

The stations are 8 feet long, and subs are completely assembled at them. “It’s all about ergonomics and efficiency,” says John Namey, vice president of real estate services for Firehouse Subs. In every location, the kitchen layout is identical, he adds. “We are rigid on kitchen layout, and everything stays the same.”