In a perfect world, every restaurant kitchen would have thousands of square feet of working space, contain all of the latest equipment and include an ergonomic design to maximize the flow of both staff and product through the space. But, it’s not a perfect world. Most foodservice kitchens are small — in fact, some
are downright tiny. Yet, even with small kitchens, many operators find ways to thrive.

Located in the Graham Hotel in Washington, D.C., The Alex Craft Cocktail Cellar & Speakeasy serves appetizers and small plates for sharing, in addition to its full line of spirits and cocktails. 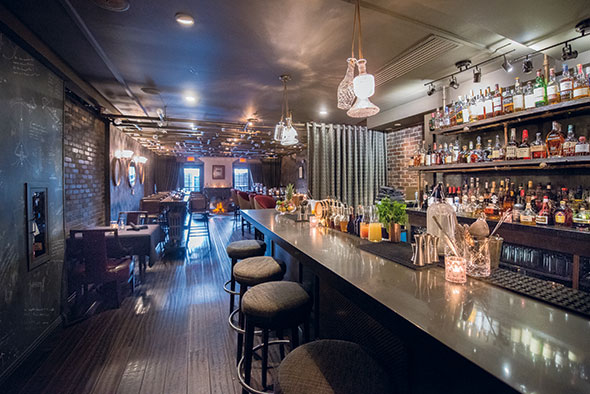 A mere 300-square-foot kitchen supports the 42-seat dining area and bar. Even in that small space, the kitchen contains two rapid-cook ovens, two prep tables, two undercounter refrigerators and a small dishwasher. The Graham Hotel’s food and beverage director, James Lee, calls the rapid-cook ovens “a great tool.” He explains, “They produce a great amount of heat in a short amount of time.” To maximize the space even more, staff use the work surface that came with, and sits on top of, the undercounter refrigerator as a prep table.

Organization keeps a small kitchen operating efficiently, Lee says. “In a tight, small space, everybody tends to just dump everything,” he says. To solve that problem, The Alex kitchen staff use labels to denote where to place utensils and equipment, so they’re always replaced correctly after usage.

Clearly defined roles for each staff member also help manage the workflow in a small kitchen space, Lee says. One crew member preps cold food, another preps hot food and a third operates the dishwasher. By keeping all the appropriate items within arm’s reach of each station, the kitchen staff don’t get in each other’s way and slow down production. “Everything is within three steps of their zone at any time,” he says. To illustrate that point, he uses the example of a food truck, where, he says, “everything is reachable.” 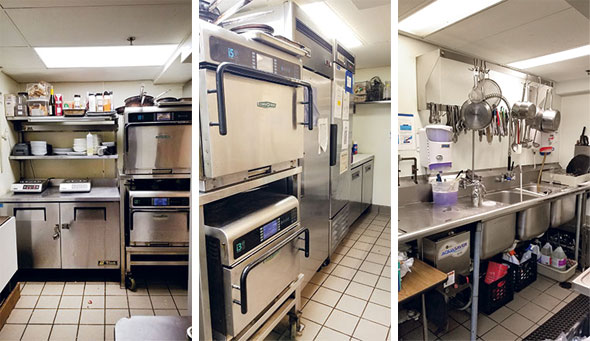 Organization and keeping everything in arm’s reach is the mantra for staff working in the 300-square-foot kitchen space at The Alex Craft Cocktail Cellar & Speakeasy inside The Graham Hotel in Washington, D.C. The space supports small plates and appetizers for the cocktail bar, in addition to functioning as backup for banquets at the hotel.

During exceptionally busy times or when the kitchen staff produces food for banquets on the hotel’s eighth-floor rooftop, Lee commandeers additional workspace outside the kitchen. By setting up a table in a hallway right outside the kitchen, he creates a makeshift pickup station for finished plates.

Lee’s biggest tip for organizing a small kitchen: “You shouldn’t have any negative space,” he says. “That means, utilize every space. Every inch of that kitchen.”

An L is a fairly odd shape for a restaurant. But that’s exactly what Donna Lee, founder and CEO of Brown Bag Seafood Co., faced when she opened the chain’s first location just east of Chicago’s Loop in 2014. With a casual concept that serves freshly prepared, sustainable seafood and gourmet potato tots, she opted for a kitchen design that was long and narrow, on the long side of the L, for easier access to utilities. 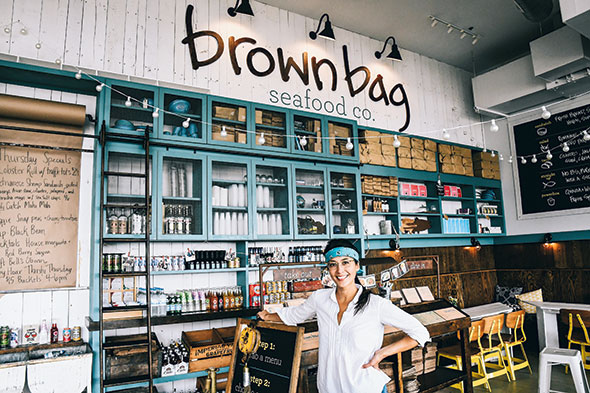 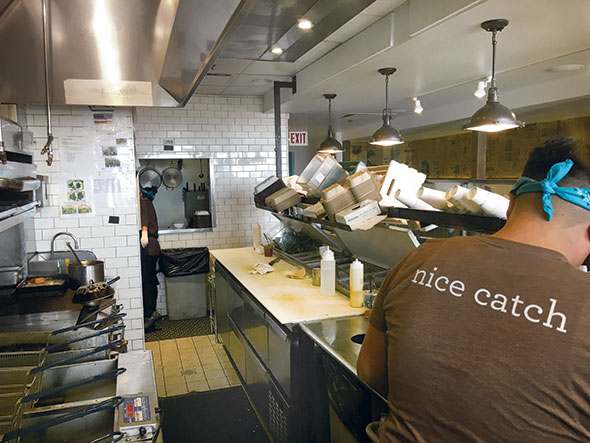 Long and narrow defines this 280-square-foot kitchen space at Brown Bag Seafood in a residential high-rise building in Chicago. One of the advantages of a smaller kitchen, according to founder Donna Lee, is that the kitchen crew learn each other’s jobs. She considers it better to ask how a concept can adapt to a specific space than to view a concept as the main driver of a space.Situated on the ground floor of a high-rise residential building, the restaurant measures slightly less than 2,000 square feet with a kitchen that’s approximately 280 square feet. “I think that some of the best spaces are those [where] you have to figure out how your concept is going to fit in versus thinking that your concept is going to be the driver of the space,” Lee says.

The kitchen equipment includes a four-foot flattop grill, a salamander, three fryers and undercounter refrigerators and freezers. Brown Bag Seafood now operates five units in Chicago; a change in newer restaurants is the switch to standing-height refrigerators and freezers. “We like refrigeration that has a combination of drawers and doors because the drawer space allows for a lot of interior volume,” Lee says. “The drawers allow you to have everything panned up in one-sixth or one-third pans. Then you can just pull a drawer out and swap out something into the makeline.” To hold hot items more effectively, she also had shelves custom designed to attach to the fryers.

In terms of staffing, Lee finds small kitchens actually offer an advantage because they force crew members to learn other crew members’ jobs. “In a traditional kitchen, where you have your mise station and your saute station, nobody really starts to cross over. But [when] a kitchen’s tight, your [expediter’s] eventually going to learn grill. Grill’s going to eventually learn fry. In the case of Brown Bag, you only have five minutes to make the food, so you have to learn every role that’s in there,” she says.

Lee says one crucial mistake operators make with small kitchens is “if you think you have a spot for something and then you choose to make your kitchen larger because of it, that’s a misstep. People have a way of adapting to the space.”

Esters Wine Shop & Bar in Santa Monica, Calif., offers an extensive brunch, lunch and dinner menu — including sandwiches, salads and burgers — to accompany a wine list of more than 250 varieties. Esters seats about 50 people in its dining area and can accommodate another 40 or so on its outside patio. There’s nothing at all unusual about that — until you realize all of Esters’ food comes out of a kitchen that measures about 180 square feet. Jessica Liu He, Esters’ executive chef, calls the kitchen “super-tiny and petite.” 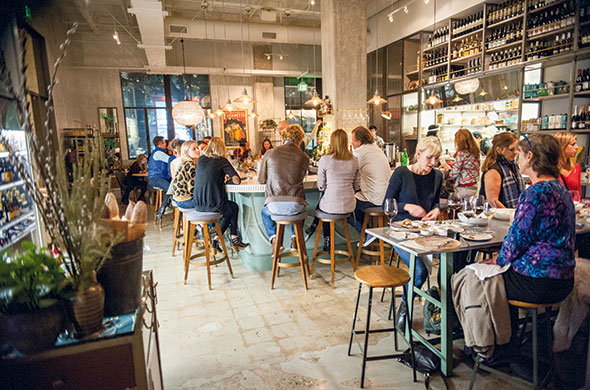 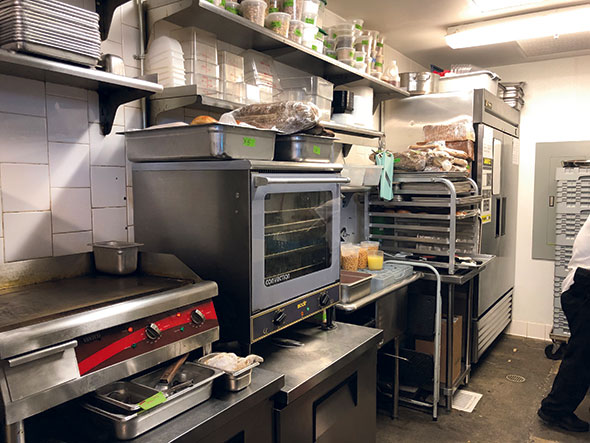 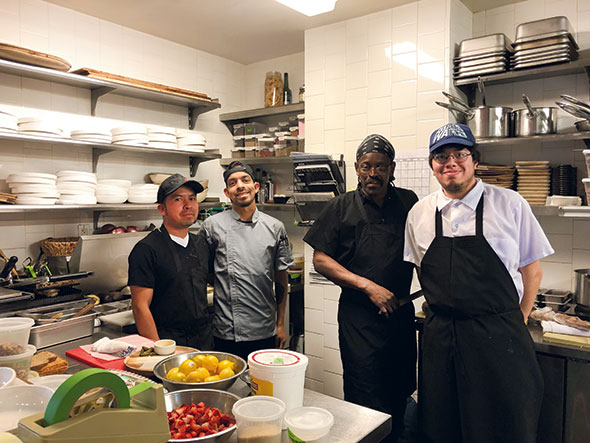 The kitchen staff working in the 180-square-foot kitchen at Esters Wine Shop & Bar output brunch, lunch and dinner items in the ultra-tiny space. The small space includes a surprising amount of equipment, including a flattop grill, combi oven, panini press and induction burners.

There’s a lot of equipment packed into that tiny area, however. The kitchen contains a small flattop grill, a panini press, induction burners and a combi oven that holds four half-sheet trays. Additional equipment includes a full-height refrigerator along with two undercounter refrigerators and an undercounter dishwasher. During peak times, Liu He and as many as three other staff members work in the tiny space.

Sous vide cooking works well in the kitchen at Esters, Liu He says, because it allows her to prep food overnight without needing someone to watch over it. It also allows her to quickly move food into the production process and out of the limited cooler space. “We try not to keep things that we purchase in our refrigerator for more than two to three days,” she says. “The faster we process it and prep it out, the more shelf space we have.”

Like other operators who face the small kitchen challenge, Liu He uses every available inch of space — such as under prep tables — to store ingredients and product. She also provides clear instructions as to where staff should store everything. “Even in a 180-square-foot place, you’d be surprised how quickly somebody can misplace something because there’s just so many other things that can cover it,” she says. But the kitchen size also plays into her buying strategy, limiting any overbuying. “You’re so tight that you’re aware of even as much as an extra bottle of olive oil,” she notes.

For Liu He, the key to working successfully in a small kitchen is team training. “A lot of people who come into Esters have worked at establishments that are quadruple or even 10 times the size of Esters,” she says. “I tell them, ‘Keep in mind our kitchen is very small. You need to learn how to work in one-quarter of the space that you’re used to.’”

How to Make the Most of Tiny Kitchen Spaces

Designer and consultant Amy Hegarty has seen a lot of tiny kitchens. As principal of Foodservice Consultants Studio in Henrico, Va., she often confronts small-space design problems and finds the shape of the space is important in the design process. “If you’re lucky enough to be a part of the planning for the space, a rectilinear [shape] is more efficient than one with angles and curves.” Also, she adds, in the design stage, efficient placement of doors near receiving areas or dining rooms can make for a better flow of product and people.

In a small kitchen, storage becomes critically important, and Hegarty notes that many small kitchens can’t afford to take up space with a full set of standard wire shelves. When that’s the case, she recommends attaching shelves to any available wall or undercounter space. Smaller wire shelves may be a good choice for overhead-mounted shelves because they promote airflow and, she explains, “you can see from beneath what’s on the shelf so things aren’t hiding from you.”

Equipment that can do double duty — such as combi ovens or tilt skillets — can also be important space-savers, says Hegarty, especially when the equipment has a small footprint. “If you can combine efforts in any of the pieces of equipment, [that] will help save space,” she says.

Hagerty believes menu analysis can determine the optimal use of equipment and lead to space saving as well. “Think through your menu and how you plan to use the different equipment,” she says. “If you say, ‘We’re going to need the pasta cooker, but not all the time,’ then there’s other ways to cook pasta. It’s all about planning and having your procedures down to a science.”