Food may have the big name-making potential, but any restaurant operator will tell you that when it comes to adding energy and boosting profitability, the bar is the star. Markups and margins on liquor are exponentially better than those on food. What’s more, liquor isn’t perishable, and a tight team in a relatively small amount of space can run a highly profitable bar. 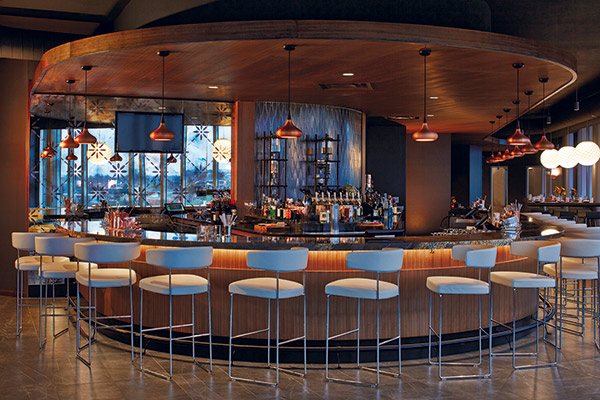 The bar at VASO, a new rooftop restaurant and bar atop the AC Columbus Dublin Hotel in Dublin, Ohio, features multiple cockpit-style bartender stations to create efficiency and streamline service. Photo courtesy of AC Columbus Dublin HotelHaving rock-star bartenders helps, but the physical design of the space and what sits within it have a lot to do with an operator’s potential to maximize bar sales and profits. Smaller footprints demand sharper focus on efficiency. Taking an industrial engineering approach helps to ensure individual bartenders have everything they need — from bottles and taps to shakers, glassware and garnishes — within easy reach to serve the most drinks in the least time.

In a busy bar, seconds matter, notes Chris Adams, principal at Ellis Adams Group, a hospitality consulting, operations, branding and design firm based in Los Angeles. “This business is all about basic math,” he says. “The more drinks that go out, the more money that comes in. If your bar is poorly designed, you inevitably leave money on the table because bartenders can’t move fast enough.”

As in the kitchen, where the classic precept of mise en place helps to ensure efficiency, Adam suggests the goal should be to put everything a bartender needs to produce an operation’s top-selling 40 drinks within easy reach. Achieving that level of functionality begins not with physical design, per se, but with careful consideration of concept and menu, both food and beverage.

“When you just build your bar as an add-on amenity with no intention or focus, it usually gets compromised,” adds Eddie Navarrette, founder and chief consultant at FE Design & Consulting in Los Angeles. “One of the first requests I make when going into design and concept development is to see the menu, and not just the food menu but the beverage menu. Before you think about designing a great-looking bar, you need to think carefully about what you want that bar to be. What story do you want it to tell? What will your specialty drinks be? Are you going to be wine-heavy, beer-heavy? Be a great bourbon bar or cater to the high-end craft cocktail crowd? Are you serving food at the bar? Once we know that, we can start to think of the things that you’ll need to tell that story in the best and most efficient ways possible.”

Whatever the concept or story being told, and whatever the anticipated volume, simply walking through the basic drink-making process should inform bar design and setup. For shaken cocktails, the bartender’s side of the rail includes setting up and possibly chilling the glass with ice and water; grabbing a jigger; filling a tin with ice; picking up a bottle and pouring; shaking; dumping the water and ice used to chill the glass; transferring the drink to a glass; finishing/garnishing; dumping ice from the tin; and rinsing the tin or accessing a clean one to move on to the next cocktail.

To make it easy for bartenders to complete such steps without having to leave their stations, bar designers have increasingly embraced cockpit-inspired design, putting as many necessary components within easy reach, left, right, front, back and, in some cases, up. Back to math, Adams points out that doing so can significantly boost a busy bar’s bottom line.

“If I don’t have to take more than one step to get what I need, I can knock a few seconds off of the time it takes me to make each drink,” Adams says. “By the end of the night I’ve been able to make 15, 20, 25 more drinks than I would have been able to if I had to leave my station at some point to do what I need to do. By the end of the year, that equals a whole lot of money.”

Adam Weisblatt, partner at Los Angeles-based consulting and management services firm Last Word Hospitality, uses sushi restaurants for bar design inspiration. “Sushi chefs do so many things and have access to so many ingredients all within one step of their position,” he says. “If you sit and watch a great sushi chef, you’ll see that he pretty much only moves his arms and torso. He never has to walk anywhere to get what he needs.”

A couple of basic design principles provide keys to achieving that sort of efficiency. For starters, an aisle width from backbar to front should typically be no more than 3 feet for maximum efficiency, Adams says. The distance between a bartender’s knees to the edge of the bar top has important ergonomic implications.

“Bartending is tough on the body,” Adams notes. “There’s a science to making sure that the bartender doesn’t have to lean forward to get to the bar top, which puts strain on the back. But you see that scenario a lot. Even more common are bar tops that are tucked in too close to the bartender, jutting over the ice and bottles below, making them hard to access.”

Weisblatt adds that providing sufficient workspace for bartenders is also important, enabling them to build drinks for a six- or seven-top table all at once versus having only enough room to do two or three drinks at a time and then start again to complete the rest of the order.

For cockpit-style stations on a front bar, positioning a dump sink to the right of each bartender’s station can greatly improve efficiency. After bartenders pour each cocktail, they can dump the ice from the shaker and move on to the next drink without walking away to dump the ice someplace else, Adams says. And he increasingly advocates for installing glass rinsers — the type often seen in beer bars — at each station. Traditionally used for reducing foam in beer, rinsers also enable bartenders to quickly rinse out tins after dumping ice without walking away.

While traditional soda guns remain the standard in many bars, particularly at high-volume operations where speed is critical, the craft movement has higher-end cocktail bars opting for bottled and canned mixers instead. That’s a menu- and concept-driven decision that has implications for bar logistics and design.

Namely, reach-in refrigerators typically reserved for beer and wine now must accommodate mixers too. And trash becomes a bigger issue, requiring careful consideration of both storage capacity and pickup schedules.

And beloved as they are, the craft beer and cocktail movements have made efficient use of space more critical than ever. Finding storage increasingly becomes a challenge with various specialty beers and drinks each calling for a unique serving glass, and many bars also matching various wines to appropriate glassware.

Single-door coolers and freezers represent one solution that Adams likes. “We used to have drainboards all over the bar that held all of the glassware but now, instead of drainboards, I’m installing front-loading, single-door coolers and freezers. They give me more cold storage space, so I can do all of the craft stuff, and their tops become glass storage space,” he says. “I’m not taking up any more space, but I’m getting more functional equipment to be able to accommodate some of the crazier stuff we’re doing on the craft side.”

He adds that underbar, slide-top coolers traditionally used to store chilled glasses or bottles are particularly inefficient. “That’s one of the first things I eliminate in any project I go into where those are in use,” Adam says. “They waste space. You can’t put anything on top of them.”

Finishing drinks as well as point-of-sale transactions play an important role in design planning. And it’s one Weisblatt says is often not considered until late in the game. “A lot of times, people spend so much time and money designing beautiful backbars and at the last minute they realize they have to plunk down two cash drawers and computer screens in front of them, facing guests,” he says. “So now, not only do your bartenders have to turn away from guests to complete transactions, but that beautiful, strategically lit backbar is obstructed by computers.”

If an operation anticipates high bar volume, Weisblatt prefers machines incorporated into the front bar, one shared between each two bartender stations. If transaction speed isn’t as critical, one solution he likes is to construct the backbar counter such that the cash draw or drawers sink into it with the computer monitor residing in a slide-out cabinet. 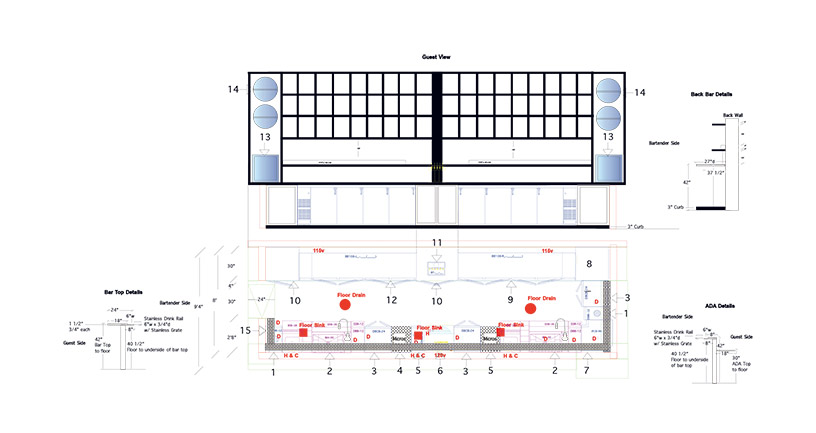 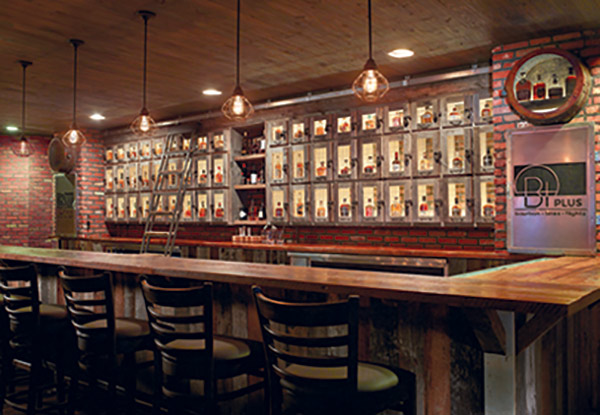 B Plus, a specialty bourbon bar at the Atlanta Airport Marriott, showcases individual bottles in strategically lit lockers with wire mesh doors along the backbar. Image courtesy of Ellis Adams Group

With classic and increasingly creative craft cocktails grabbing the spotlight, ice represents another critical consideration. Of course, drinks need ice. But ice is no longer simply ice. In many operations it serves as a differentiator, with various shapes, sizes, styles and flavors of ice being carefully matched to enhance specific drinks.

“Some bars go a little crazy with it,” says Navarrette of the artisanal ice trend. “I’ve had four machines at one time in one location. But that was their program, and it worked because we’d planned for it ahead of time. The way the bar industry is headed, especially in urban markets, you can no longer get away with having a mediocre cocktail program; you have to bring something unique to the table. Bar design needs to keep up with and accommodate what’s happening, and that means paying attention to things like ice.”

To that end, Navarrette prefers freezers for custom ice and ice machines in general to fit into the underbar, making them easily accessible. And in figuring initial space planning, he suggests positioning the bar adjacent to a shared resource area, where bar staff can easily access additional ice machines as well as backup supplies and ingredients.

Adams agrees that building in more sophisticated ice capability matters now more than ever. “Ice is a huge component of the cocktail culture right now,” he says. “Having great, clear ice, having different shapes of ice, etcetera, means you need freezers behind the bar to handle it. I was on a site visit the other day, and the poor kid tending bar had to go to a freezer in the back of the house every time someone ordered a cocktail that called for specialty ice. He probably missed out on $1,000 worth of drinks he could have been making were he not spending time running back to get ice.” 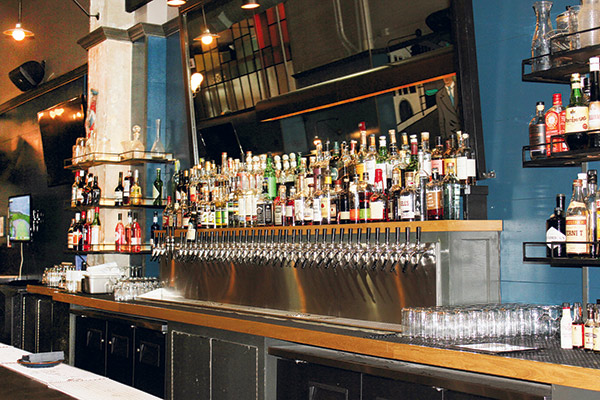 Extra Shots: Advice from the Pros

Forget symmetry. “Codes determine things to some extent, but too often bars are needlessly built on symmetry with a three-compartment sink in the middle and wells off to the sides. That sink is big, it makes you absolutely no money, and rather than having your strongest bartender in the middle making drinks and engaging with guests, you have a barback washing stuff. It’s also often redundant because there’s usually an underbar glass washer.” — Adam Weisblatt, Last Word Hospitality

Avoid custom. “When you start trying to put weird angles and rounded edges in, you’re basically looking at all custom. The price to build out your bar shoots way up versus being able to just grab and install the equipment you need. It’s always easier and more affordable to do straight runs, getting off-the-shelf equipment in place first and designing around that.” — Chris Adams, Ellis Adams Group

Rethink islands. “Designers think island bars look great, but they make employees uncomfortable. Bartenders are never sure who’s behind them or who’s potentially running into them with a $20 cocktail that just took them five minutes to make. In traditional bars, with a backbar and front bar, employees can see everything in their peripheral vision, and there’s much less franticness.” — Eddie Navarrette, FE Design & Consulting