A Pro You Should Know: Amy Morton Carves Out Meat-Centric Niche

Restaurateur Amy Morton, daughter of Chicago restaurant legend Arnie Morton, has more than 25 years of experience in the restaurant industry. She learned the business from the ground up, working nearly every position at Morton's, from server to director of recruitment and training, before her father sold the restaurant in 1987. She also oversaw staff at her father's other restaurants, Arnie's Restaurant, Morton's Market Place, Arnie's North and First Street Pier. 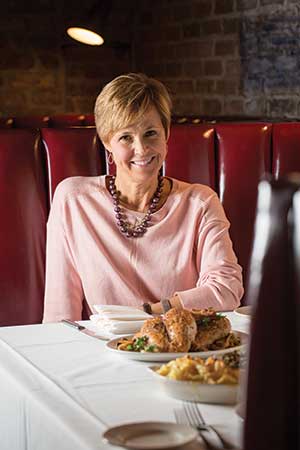 Amy Morton ,Owner, Found Kitchen and Social House, and The BarnAmy opened her first restaurant, The Café, in 1988 with her brother Michael Morton (of Nine Steakhouse and La Cave) in Chicago's Gold Coast neighborhood. She went on to open her best-known endeavors, Mirador and The Blue Room, in the Old Town neighborhood soon after in 1989. After selling Mirador, Morton founded Morton-Van Housen Consulting (MVC) in 1995, working with top chefs and restaurateurs around the world.

After taking a 10-year hiatus to raise her 3 daughters, Morton returned to the industry to open the seasonally driven restaurant Found Kitchen and Social House, helmed by Chef Nicole Pederson, in Evanston, Ill. Most recently, she collaborated with Pederson to open The Barn, a modern steakhouse and meat-centric concept in the same city in 2016.

FE&S: Growing up, what drew you to the restaurant industry?

AM: I loved being with Dad and it was a bonus that I made a little money when I was young. I actually started working with him when I was 14. I think what I liked the most was the people and second was the food. It was also really great having every day be something new.

FE&S: What were some important lessons you learned from your father that you use today?

AM: How to seat a room so that it always looks as busy as possible with the least number of guests, that the guest is always right, and to keep up the maintenance — even of the smallest things.

FE&S: What were some of the steps that led you to open Found?

AM: Lots of soul searching, location hunting and constant rewrites of my concept.

FE&S: What drew you back to the industry after the time off?

AM: Actually it was my old friend and chef, Art Smith, who put the idea in my mind. He saw how into organic food I was — before it was hip — and thought it would be really cool.

FE&S: How do you describe the difference between Found and The Barn?

AM: Found has lots of eye candy, it's very eclectic, busy and feminine, and laid out more like a house with a variety of rooms. Found is a farm-to-table, shared plate restaurant with an ever-changing menu and the food at Found is really quite complex. Everything about The Barn is a nod to my Dad, but it's my way. I always knew I would do something with steak and meat in general, but it took me a long time to figure out what that was. The Barn is simple, structured and masculine. The small meat-centric menu will remain constant, with simple preparations that allow the central ingredient to shine.

FE&S: How do you differentiate The Barn with the classic steakhouse style that is Morton's?

AM: We're offering the whole barnyard, where traditional steakhouses offer primarily beef. Of course, there will be steak on the menu though it's a sidebar to a broader menu with a wider range of proteins — there is so much amazing meat out there and we wanted to offer more and let Nicole's talented cooking and classic training shine. From the beginning we knew it would be meat-centric and as we refined our ideas it morphed into French butcher shop. That was really the basis.

Another big difference is that our cuts are a bit smaller, not only to create a more affordable experience but also to be a better custodian to the planet. We're also very focused on where the meat comes from and how the animals were raised. We serve the best Prime Heritage Angus beef from a fourth-generation butcher out of Indiana with a choice of three cuts: a 14-ounce New York strip, a 16-ounce ribeye and a 10-ounce tenderloin, all presented tableside on the bone with accompaniments like butterball potatoes and marrow butter, bearnaise and red wine demi-glace.

The menu doesn't change as often as at Found, which is more about seasonal cuisine. We wanted to be more tried and true [at The Barn] with the menu so our guests know if they want something they can always get it. But we have nightly specials. Wednesdays, for example, we offer chicken pot pie with a creamy chicken veloute and flaky pastry crust. We also have an amazing roast chicken from a sustainable farm in Pennsylvania available every day. Last year, Nicole was crowned the "Princess of Porc" after winning Cochon 555 in Chicago, so she's also known for her pork chop. Nicole breads the tenderloin and sears it off with honey, garlic and herbs and then finishes it by roasting it in the oven. Right now, she's serving it with sweet potato puree and roasted apples and hazelnut relish.

FE&S: How does the beverage program work into the mix?

AM: The beverage program was created by Michelle Sallemi, a Level 2 Certified Sommelier for the Court of Master Sommeliers. Michelle focuses on classic recipes and has curated a wine list that is very thoughtful, with a blend of adventurous, hidden gems and classic, well-known vintners and varietals.

FE&S: How have you worked to carve out a niche for yourself as a woman in what is a predominantly male segment of the restaurant industry —the steakhouse?

AM: I guess that hasn't been a huge focus. What's most important to me is being the best at what I do and allowing my creativity and passion to speak for itself.

FE&S: What key design differentiators did you incorporate to open the concept up beyond the classic male-dominated customer base?

AM: These have not been conscious choices because as my dear Dad would say, "Everyone's money is the same color!" I do believe, however, that simply being a woman draws more women to the restaurant, and, of course, the design being very personal to me may speak to this as well. My main goal was to maintain the integrity of the space, which is basically an old barn that hadn't been used in over 100 years and is sort of hidden off the main street in an alley. So what we were going for was that speakeasy or supper club look and feel. Without even saying anything I had guests telling me that's what they thought it was like, so it worked! The building was actually built in the late 1800s to house the horses for the Borden Milk Company's milk delivery service.

FE&S: What are your goals/visions for Found and for The Barn?

AM: Continuing to make these the best dining experiences people could hope for and doing our best to be hospitable and genuine. And, hoping always that our guests will feel welcome and like they belong.