When Klaus Mager visited China’s White Swan Hotel back in the ’70s, he was treated to an early preview of what was to become a sensation in the states decades later.

“My boss and I were invited to lunch by the general manager and served a noodle dish that he said was creating a revolution in China,” says Mager, owner of Food with Thought, a Bend, Ore.-based food and beverage consultancy. “What I see in the U.S. right now is this healthier ramen becoming a popular alternative to fast food, with its nutritious broth and healthier ingredients.” 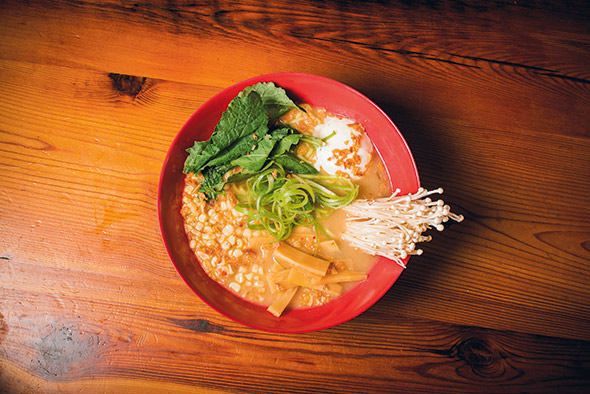 “We built three noodle shops in Hong Kong with equipment that could cook noodles in 90 seconds, so tiny kitchens could produce 300 meals per hour,” Mager says. “From an investment perspective, along with ease of production, this is a segment that has a ton of potential.”

Consequently, it’s no surprise that the Asian foodservice segment as a whole continues to grow. According to Chicago-based market research firm Technomic, the total industry, including chains and small mom-and-pop operations, saw total industry sales of $6.6 billion last year, up 4.3 percent from 2016. Top chains comprised $4.55 billion of this total, with chains comprising almost 69 percent of the limited-service Asian/noodle segment. Full-service restaurants, including sushi bars, Asian steakhouses, ramen bars and Mongolian grills, were a $23.55 billion category in terms of consumer spend for both chains and independents in 2017, up about 4 percent from the previous year. Chains in the full-service category, which comprise less than 10 percent of the Asian/noodle segment as a whole, took in sales of $2.3 billion in 2017.

According to David Henkes, senior principal at Technomic, the Asian/noodle segment is outperforming the foodservice industry as a whole.

“When we look at limited-service Asian restaurants, it’s an exciting place to be,” says Henkes.

However, sales at three of the top five Asian/noodle chains were down in revenue for 2017, including Pei Wei Asian Diner, which saw a decline of almost 3 percent; Sarku Japan, down 7.6 percent; and Noodles & Co., down 6 percent last year, with a dip of 10 percent in unit counts.

“In the case of Noodles, it was a matter of growing dramatically during the big fast-casual expansion a couple years ago and then subsequently struggling to generate the incremental revenue required for sustained growth,” says Henkes. “Last year, Noodles shut down 55 locations, focused on underperforming restaurants and brought in a new CEO [to get back on track].”

“Part of it is where and how they’re expanding,” says Henkes. “The issue overall is this segment is oversaturated, so chains need to be smarter about how and where they grow. If they’re not generating incremental sales, it’s a recipe for disaster.”

Despite these challenges, there remains much promise, especially with ramen noodle bars. Ramen became known in the United States back in 1971, when Taiwanese businessman Momofuko Ando created the first dehydrated and partially cooked ramen noodle cups.

“Today, we have gotten away a bit from ramen being associated with the processed version. It has now been elevated to a food with an incredible history, taste and flavor,” says Liz Thompson, owner of Liz Thompson Marketing, a restaurant consultancy based in Los Angeles. “It took another 30 years before it found a place on Asian restaurant menus.” She says ramen bars are not being reinvented, but instead being brought out into the public more with the existence of social media and people wanting to be part of something new.

“With noodle bars’ newly earned popularity today most of the popular ones that have been in existence for many years are now even more popular because of their authenticity,” says Thompson. “This includes places like Orochon Ramen in downtown Los Angeles, known by insiders as the place to go if you want to test the limit on how hot you can handle your heat level, and Red [Red 88 Noodle Bar] in Davis, Calif., executed correctly by those who have grown up with the food and understand the nuances involved with proper preparation.”

Thompson notes other popular noodle restaurants include New York City’s Momofuku and Los Angeles’ La Brea Ramen Bar. “New noodle bars have to be authentic and real,” she says. “It’s about all the flavors of the ingredients melding together in an extremely affordable one-pot meal.”

Asian with a Twist 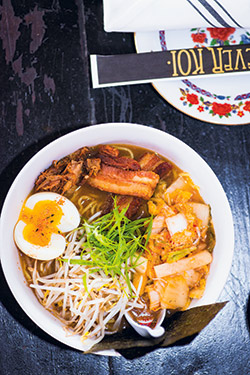 Clever Koi offers a modern take on ramen.A number of Asian/noodle concepts popular today represent a departure from the traditional. That includes modern ramen shop Clever Koi in Arizona. The concept’s first store opened in Phoenix five years ago with a second site added in downtown Gilbert, Ariz., in 2016.

When co-owners Joshua James and Nicholas Campisano opened Clever Koi, there was nothing like it in the area. “Our background is primarily in Italian cuisine, but we wanted to create a nontraditional ramen concept that reflected history and explored the Asian side of traditional cooking,” says James.

The 86-seat Phoenix restaurant and 135-seat Gilbert location use an identical menu that includes Korean-style steam buns, dumplings, and both rice and noodle dishes. “Our most popular menu item is the pork belly steam bun, which is very traditional with slow-braised pork belly that is smoked then fried, and topped with hoisin, peanuts and cilantro,” says James. “We also are known for pig face dumplings, which are traditional dumplings with pork cheek that is smoked and braised for 24 hours and served with kimchi and house-made red sriracha.”

Clever Koi’s traditional Japanese ramen broth takes four days to make. The process starts with slow roasting pork bones; staff then add vegetables and a dense tare base to the broth before simmering it for 24 hours. “The equipment we rely on the most are woks and burners for our broth,” says James. 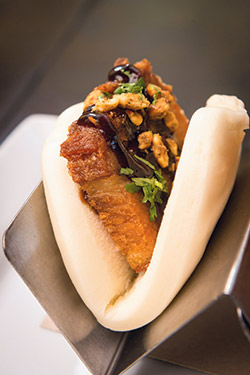 Customers order the pork belly steam bun more than any other item on Clever Koi’s menu.To cold smoke the pork belly, staff use a chafing dish with a perforated hotel pan, ice and a jet burner, along with almond wood soaked in water.

“This cuisine was a hobby for us, and as our concept evolved, we wanted to get away from the modern style and more toward traditional recipes,” says James. “The goal was to pay homage to the various regional cultures our food comes from.”

He has noticed the more modern Asian concepts that were trendy in the last few years have started to wane. “As new cuisine comes out, you lose the emphasis on the roots where food comes from and identifying with the past,” says James.

Yet, consumers still have an appetite for creative Asian concepts. Baltimore’s Ejji Ramen was one of the first noodle bars to focus on ramen in the city when it opened four years ago. “There were some Vietnamese restaurants, but really no ramen,” says co-owner Oscar Lee, who co-owns Ejji Ramen with Ten Vong. “We wanted to fill that void.”

The nontraditional concept focuses on local ingredients with a still-evolving menu. Its location in Belvedere Square Market, a mix of retail shops and five restaurants, is perfect for a concept that doesn’t require much production space.

The restaurant prepares its 3 different scratch broths in just 500 square feet of space, which includes cooking, prep and storage areas. Its vegetarian/vegan miso has a corn base, which is a departure from the traditional chicken, beef or pork-based broth. Ejji’s does offer a classic pork-based broth, which takes 36 hours to prepare from start to finish. Staff prepare the pork-based broth twice weekly.

Its equipment mainly consists of a stove for preparing soups in 60-gallon stock pots, a fryer and a noodle cooker. 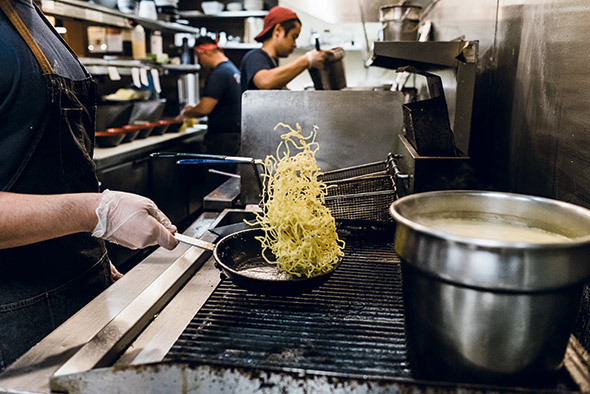 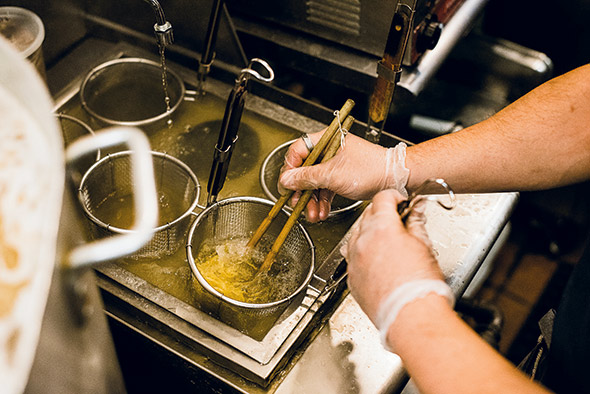 The eatery’s signature dish, Malaysian Kotsu, includes crispy, battered eggplant, sliced cucumber and a miso organic egg. Ejji also offers a mac and cheese ramen dog, a beef hot dog wrapped in ramen, dipped in a tempura batter and fried. “This is a comfort food. Everyone who went to college knows ramen, but it’s a grown-up version,” says Lee. “We’ve seen innovation in terms of ingredients, styles and broth making. Now, the local farm to table is seeping into the ramen space.”

Ejji’s covers a wide demographic, from young children to seniors and even those with health problems who see benefits in consuming the broth. “Ramen can be discriminating to vegetarians and vegans, as it is primarily based on pork or chicken broth, and also not appropriate for those with gluten allergies,” says Vong. “We not only offer a vegetarian broth, but also a veggie noodle version with zucchini, jicama or squash.”

Vong and Lee didn’t expect that these options would be big sellers, but the healthier versions currently comprise a high percentage of Ejji’s sales. “People want to eat healthier these days, so we try to offer other options,” says Lee.

Even with the category being overbuilt, demand for this cuisine remains high enough to keep it in growth mode for the coming year. “It appears that some big chains got declines out of the way and are fixing the internal dynamics of the business,” says Henkes. “For 2018, we’re forecasting 5 percent growth in the limited-service Asian segment and 3.5 percent for full-service operations.”

More limited-service and chain operators may start following the lead of the mom and pops, with a bigger focus on takeout and delivery.

“Those Asian/noodle concepts that don’t have a unique position and off-premise option will struggle in today’s competitive environment,” says Henkes. “It’s important not only to concentrate on the on-premise experience, but also deliver that experience off premise. Those tend to be areas more chains are concentrating on.”

Also, menus offering regional tastes are becoming more prevalent as Asian/noodle concepts seek to differentiate their operations. “This is where chains like Noodles and PF Chang’s can go,” says Henkes. “Bonchon Chicken, which focuses on Korean chicken and wings, is an example of a concept that has grown pretty fast. Those who can excel and differentiate will come out on top.”