Realizing there was an opportunity to capitalize on traditional recipes from Naples, Italy, Michele Scotto brought his family to the U.S. in 1964 and proceeded to build a legacy for his sons, Anthony and Ben. 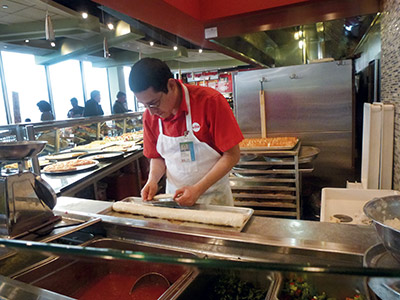 : The dough is made from scratch at each of Villa Italian Kitchen’s 379 locations.The first Villa Italian Kitchen restaurant opened on Broadway in New York City next to what is now the Ed Sullivan Theater. "One of the restaurant's claims to fame is serving Diana Ross who, at the time, didn't have enough money to pay for a cup of coffee," says Andrew Steinberg, executive vice president of corporate business for Villa  Italian Kitchen and its parent company Villa Enterprises Management.

Both Ben Scotto, now president, and Anthony Scotto, CEO, have driven the growth of the concept for the last two decades. Villa  Italian Kitchen currently operates 379 restaurants in 44 states. According to Chicago-based market research firm Technomic, U.S. sales in 2014 totaled approximately $134.5 million, an increase of more than 20 percent from the year prior.

FE&S spoke with Steinberg about the concept, including the menu, key equipment and upcoming brand development plans.

FE&S: Many large pizza chains are consistent in terms of size, layout and decor. Is this true of Villa Italian Kitchen?

AS: We have a prototype for our sites, which are primarily in mall food courts. Our locations range from 800 to 1,000 square feet, with about 18 to 20 linear feet of counter space. We also have airport and casino operations that are comparable in terms of the look and feel of the outlets. Less than 5 percent of our Villa Italian locations include inline seating.

FE&S: What equipment is integral to Villa Italian Kitchen's operations?

AS: Mixers and pizza ovens are used most often for pizza production. We utilize a steamer that supports the steam table and 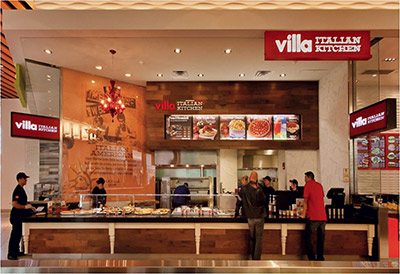 Villa Italian Kitchen units, which are primarily located in mall food courts, range in size from 800 to 1,000 square feet.six-burner stoves to make our sauce and pasta. We have limited freezer space, since we mainly use fresh ingredients, so prep tables include refrigeration underneath. On the front line, pizzas are held on hot plates, and pasta and entrées are kept in steam tables.

FE&S: This concept has been around since the 1960s. Have there been many changes since the chain's founding?

AS: Other than equipment tweaks to take advantage of updated units, there haven't been many changes in our kitchens. We have replaced our steam table wells with tall pots and oval pans on the front counter display, which provide more upscale merchandising for our entrées. Currently, we're seeking new ovens for a 90-second made-to-order brand we're working on.

FE&S: What are the company's plans in the year ahead?

AS: We're working on brand development concepts under our umbrella company, which will be Villa Restaurant Group rather than Villa Enterprises Management. The name change better reflects what we do and who we are. Our plans include taking over more food courts with different brands. There are currently four malls where our concepts make up the entire food court and many others where we have between two and four restaurants. This provides added efficiency, since we can share personnel at these sites. Having a diverse portfolio has served us well.