The Brass Tap: Not Just a Bar Anymore

The market for craft beer today looks very different than it did back in the late 2000s. While these specialty brews were on the rise then, they could hardly be called mainstream. Today consumers find craft beers up and down the grocery store beer aisle, and craft beer offerings occupy more than their fair share of taps at the average bar. 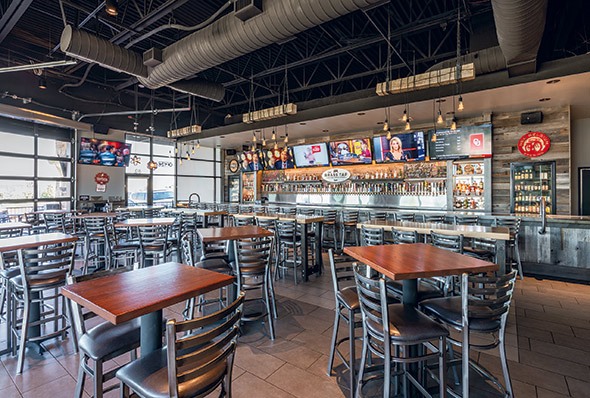 It makes sense that the craft beer market’s maturation has led to the evolution of craft beer-focused bars and restaurants. After all, since consumers can now get a great IPA at a standard burger place, craft beer alone isn’t going to make an operation thrive. These places now need to offer good food and good times to match. They need to give potential guests a real reason to visit.

The Brass Tap, a Tampa, Fla.-based craft beer bar, serves as a great example of this evolution. When the chain started in 2007, it offered craft beer and craft beer alone. There was no liquor and no food. At the time, craft beer was a big enough draw for the concept to succeed and within a few years, it grew to three units in the Tampa area. 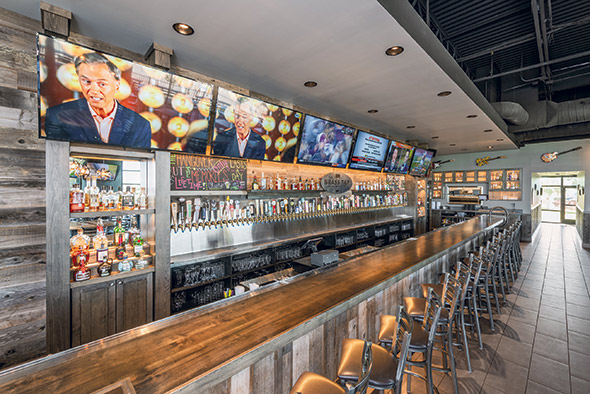 Warm materials, like reclaimed wood, encourage guests at The Brass Tap to relax and just maybe order another round.

In 2012, Family Sports Concepts (FSC), owner of the 175-unit Beef ‘O’ Brady’s concept, came calling. The company bought The Brass Tap from its founders and set about growing the concept.

While the core of The Brass Tap was certainly strong, says Jamie Cecil, vice president of franchise development for FSC, some changes were in order. “We quickly realized that we needed a little bit of food and probably some alcohol as well. We introduced what we called a snack menu. It was just things we could knock out, like nachos, chips and salsa, pretzel bites  that kind of thing,” Cecil says. “That worked well but we quickly saw from there that a full menu would work better, so we brought in burgers, wings and fries and also introduced liquor at that time.”

With those changes, The Brass Tap’s average store sales grew by $400,000, to roughly $1.2 million. “The addition of food, the addition of a full kitchen, the addition of liquor have really been paramount in helping us achieve some great sales numbers,” says Cecil. 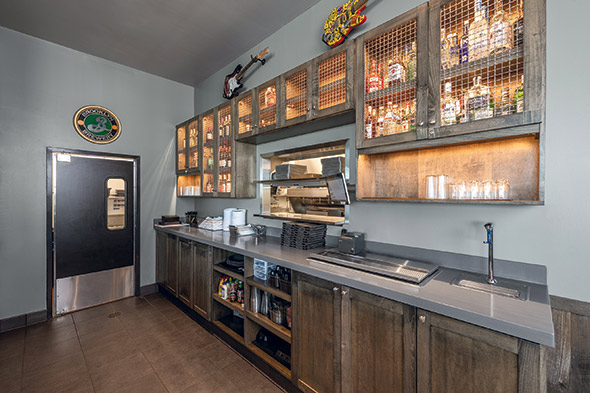 The chain expanded from its craft beer focus to now include craft cocktails (along with a full menu). This area, which sits adjacent to the bar seating, enables extra storage for liquor and additional workspace.

Even with those numbers, The Brass Tap has found room for improvement. The full menu the concept first rolled out, says Cecil, was high quality, but not particularly inventive  wings, fish and chips, a chicken quesadilla, etc. Simply put, The Brass Tap was offering craft beer, but not a craft menu. “If we truly are a craft beer place, we want to elevate the food offerings to match the level of the craft beer and craft cocktails we have in the building as well,” he states.

Earlier this year, then, the chain introduced a new chef-inspired menu that offers elevated food to pair with its elevated drinks. While the menu still offers bar staples like wings and a basic burger, it now features items like a Korean barbecue pork flatbread, tempura beer-battered chicken sliders and the LA Kogi Dog with kogi slaw, pickled onions, cotija cheese and the house’s “secret weapon sauce.”

Developing this new craft menu was itself a major undertaking. The Brass Tap started where projects like this should start  with chefs. According to Cecil, the chain created a team of about a dozen chefs from around the country to develop new, on-brand food offerings.

This team wasn’t left to follow any and all whims, though. The Brass Tap, notes Cecil, has an existing kitchen layout and equipment package. These chefs were tasked to create menu items that the kitchen staff could execute with only minor changes to the existing infrastructure.

After the menu was developed with the kitchen in mind, the next step wasn’t rolling it out system wide or even testing it in a few stores. Instead, the chain brought in a team of franchise consultants and existing franchisees to work with the chefs on menu execution.

“Instead of going through the whole process of first having the chefs create something, then we put it in the field and go back and play with it [to improve our processes], we eliminated that middle step,” says Jim Keenam, a Brass Tap franchise consultant. “We had the operators play with it before it ever went into the field.”

This approach greatly simplified the implementation of The Brass Tap’s elevated menu. After a successful test run at a handful of locations earlier this year, the chain is rolling out the menu system wide. This project, Cecil says, should be complete by the end of 2019.

As with any major menu overhaul, the elevated menu at The Brass Tap required some changes to the chain’s kitchens. In this case, though, the edits to the equipment package itself were minimal. Instead, the chain tweaked how staff would use existing equipment and where they would store specific ingredients. 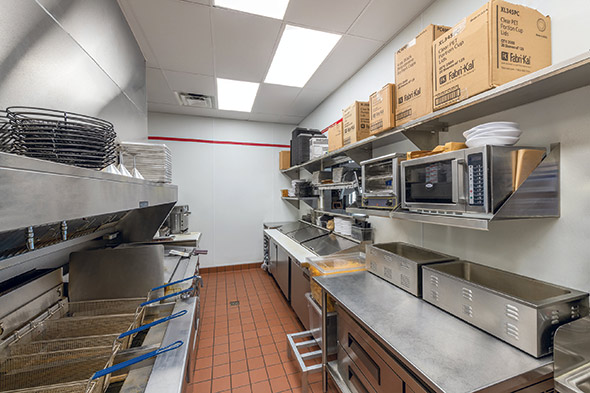 A compact kitchen and redesigned workflow allow The Brass Tap’s kitchen to function with just one to two employees during off-peak hours.

According to Cecil, the changes were aimed not just at executing the new menu. They were also designed to decrease the amount of labor needed in the kitchen. The processes for the legacy menu usually required four to six line cooks, he says. With its new menu and new processes, The Brass Tap’s food program only needs three to four kitchen staffers during peak hours and just one or two for off-peak periods.

The key to this improvement was moving away from an assembly line approach. “You don’t have a guy cooking a hot dog, then handing it to somebody else who puts slaw on the dog, then somebody else puts fries on the plate. We tried to condense the number of steps and locate the equipment so one person can cook the hot dog, top it, put the fries on [the plate] and put it on the window. It doesn’t have to go down a daisy chain,” says Cecil.

The reworked kitchen design flow includes a hot line on the back wall paired with a cold line 180 degrees away for topping/finishing items and assembling plates before they’re placed on the expo window. These two lines combine to form three stations: fry, grill and fast-cooking oven.

The kitchen begins with the fry station. This station saw the most changes as part of the chain’s menu development effort. Previously, it started with a table that had wells in an ice bath holding ingredients for breading items like chicken tenders and tempura beer-battered shrimp. Now, it begins with a 22-inch refrigerated table with wells, which stores breading ingredients on top and raw proteins in refrigerated drawers below. 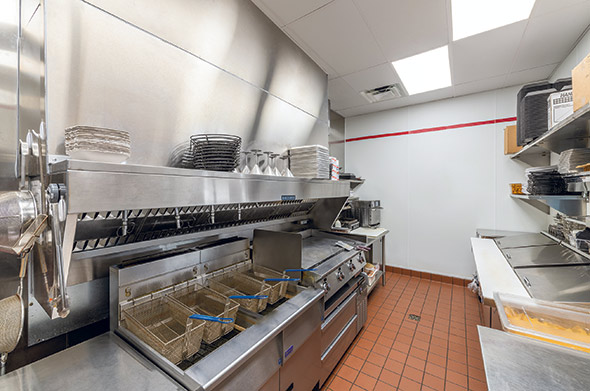 The chain’s fry station evolved in the new prototype with the addition of a new breading area and undercounter freezers opposite the fryers.

This change eliminates the need to swap out breading ingredients every two hours as previously required. It also let the operation move the raw proteins out from below the nearby griddle, where their retrieval would occasionally interfere with the griddle station’s smooth operation.

Following the breading table are two 70-pound fryers with built-in filtration systems. Here, staffers produce the shrimp and chicken tenders, along with items like french fries and wings. An undercounter freezer, a 180-degree turn away, holds the frozen items. Notably, the chain does not dedicate either of the fryers or a specific item or set of items, says Blas Laulom, The Brass Tap’s director of design and construction. “We filter [the frying oil] several times a day because of the ease of filtering. There’s no concern about flavor crossover,” he says.

The last step at the fry station involves the staffer either turning around to the cold line to assemble the plate or placing the fries in a fry dump for dishes being made by other staffers.

Following the fry station is a 48-inch gas-fired griddle on a refrigerated base, where team members cook items including burgers, chicken breasts and sirloin steak for a flatbread dish. Next to the griddle is a small worktop with a bun rack below. This setup, says Laulom, enables the grill cook to butter and toast buns on the grill, then partially assemble sandwiches. After completing those steps, grill cooks can turn around to the primary refrigerated assembly table, where they can finish the dish before it goes on the expo window.

After the bun rack comes the final station, which centers on a fast-cooking oven. This station starts with the oven itself, which sits above an undercounter freezer holding pretzels, flatbreads and other items destined for the oven.

Opposite the fast-cooking oven sits another small assembly table holding ingredients for the flatbreads. When a flatbread order comes in, the person working this station grabs a frozen crust from the freezer, does a 180-degree turn to assemble the dish, then turns around again to place it in the fast-cooking oven.

A Place to Play

While The Brass Tap’s menu gives people a reason to visit beyond craft beer, the chain offers experiences that guests will seek out as well.

“The whole point of The Brass Tap is there’s always something going on,” says Cecil.

On any given night, guests can find the Brass Tap hosting events like a trivia contest, live music, karaoke or a guided painting lesson/drinking session. Individual locations can also hold bring-your-dog events and invite local craft breweries to offer several of their beers as part of a Tap Takeover event.

The restaurant’s layout and interior design support this fun, communal atmosphere. This starts with the sightlines, says Laulom. The Brass Tap’s open layout has no walls or compartments. This design “allows our guests to see one another and obviously our servers to see our guests as well, adding to the level of service.”

Most seating, from banquette to floating tables, is bar height, allowing seated and standing guests to easily mingle and converse  once again supporting community and interaction.

Specific design highlights include a 48-inch round table with a barrel base. Paired with a decorative fixture overhead, this is one of the restaurant’s prized seating areas, Laulom says. Another is the outdoor patio, which connects to the interior through a pair of garage doors. A fabric awning or a structural element typically covers the space to protect guests from the rain and sun.

This outside-in/inside-out feature, says Laulom, “creates a very different vibe in the restaurant when they are completely opened up. We have music and speakers and television on the patio. If you are walking by or driving by, you can see and hear what is going on.”

Drawing people in is now at the heart of The Brass Tap. Today, the concept boasts nearly 50 locations, all franchised except for one corporate store, spread across the country. Another 35 are in the pipeline, says Cecil, and should open within the next couple of years.

Young professionals come to the restaurant not just for good beer  they can get that anywhere now  but to share good food and good times with other people. “The Brass Tap works where we can be the neighborhood bar,” says Cecil. “Being in that neighborhood, being a part of the community, is critical for us.”

The Brass Tap at a Glance