The buffet chain dropped "pizza" from its name, moved away from the commodity feeder look and developed a smaller, far more efficient kitchen. 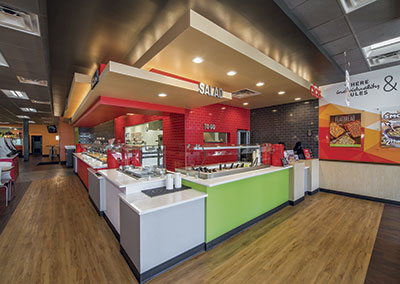 That's certainly been the case in foodservice. Over the last 15 years, the sector has seen the rise of fast casual, the spread of technology and elevated customer expectations for practically every dining experience.

Yet up until a couple of months ago, little had changed at Cici's since the turn of the century. The chain offered customers a pizza buffet in an environment that was functional but little more. "The brand hadn't done any kind of major change to decor, look, signage, any of that, for 15-plus years," says chief operating officer Steven Jones. "Most brands do that somewhere in a 7- to 10-year timeframe."

Recognizing the need to evolve with the times, the chain's leadership developed a new prototype that offers diners a better experience that emphasizes the brand's strengths while providing operators with a more efficient kitchen. 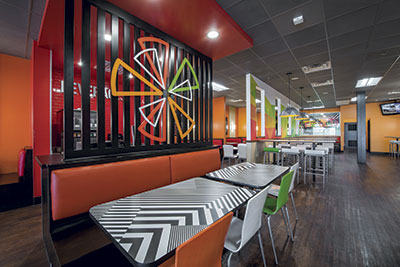 Cici’s new logo features pizza slices in a variety of colors, representing the variety of choices the chain offers. Photo by Wade GriffithThe Cici's makeover started with a slight shift to the chain's brand identity. Earlier the company stopped using the name "Cici's Pizza" in favor of just "Cici's," with the tagline "Beyond Pizza." This change, the company says, reflects the breadth of the Cici's menu, which includes, soup, salad, pasta and dessert. At the same time, the company rolled out a new logo. Dubbed "the Spark," the new logo features multiple pizza slice shapes in different colors, all coming together, representing the variety of choices the chain offers.

Naturally, Cici's has reworked its interior look to match this new identity.

Cici's previous front-of-the-house design was generic, featuring little more than two- and four-top tables and a flat, straight buffet line. Drop it into any institutional feeder or value-based buffet, and it would fit right in.

While efficient, this approach didn't play to the strengths of the Cici's brand, says Sarah McAloon, the chain's chief marketing officer. "We're about feeding individuality and empowering guests. That's always been a big feature of our buffet, but we never really clarified that for our customers . . . What we really wanted to do was bring that into the design of our restaurant."

This emphasis on individuality can be seen first in the furnishings. Instead of a sea of tables, the new store has several distinct seating areas that appeal to different demographics: high-top communal tables for the millennials; basic two- and four- tops placed near the buffet, which let workday lunch customers get in and out quickly; a section with standard booths that tends to draw older diners; and a family seating area near the game room.

The seating itself has also changed. The chain stopped using basic wood chairs with upholstered bottoms, which presented maintenance issues. Now Cici's uses heavy-duty plastic seats. Most of these are in white, with a few orange and green chairs scattered throughout. This creates a contemporary look that stresses individuality, McAloon adds.

The chain's new color palette, which includes such hues as green, orange and red, is visible throughout the restaurant and stresses Cici's use of fresh ingredients. Guests can see these colors on the walls, signage and even the art, which drives home brand messages through phrases like "a place to feed every taste." 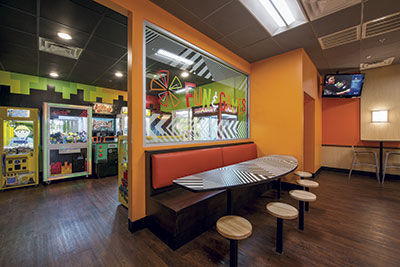 The chain’s new color palette includes red, orange and green and stresses Cici’s use of fresh ingredients. Photo by Wade GriffithThe restaurant's game room has also been reworked in this redesign. Previously, says McAloon, it was something of an afterthought. In the new setup, the game room's color scheme matches the rest of the restaurant. It now includes wall graphics reminiscent of 1980s-era arcade games, wraps for the game cabinets and brighter lighting to make it a livelier, more inviting space for kids.

Cici's also added an interior window that connects the game room with the family dining area. "There's a feature table right there [at the window], so parents can sit at the table and see their kids while they're in the game room," McAloon says.

The new design also includes a couple of signature touches. For example, a partition of black vertical shutters features the Spark logo. In addition to reinforcing the brand, the shutters fill a practical need, separating the beverage station from the rest of the dining area.

The buffet line itself represents another signature element, one that straddles form and function. The previous line had wood, plastic food shields and a black tile surface where the pizzas sat. In contrast, the new look buffet line features red tiles on the side, glass food shields and manufactured solid surface, giving it a sleeker look and making it easier to clean. The formerly straight line is now L-shaped, with the salad section sitting on the shorter part and the pasta, pizza and desserts arranged on the longer part.

The buffet also has different levels for the different offerings. This allows Cici's to visually emphasize that it offers more than just pizza, McAloon says. It also lets the chain highlight specific items, with limited-time offerings being given a special spot on the line. 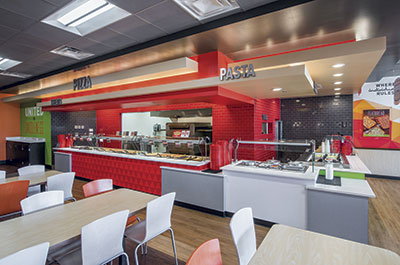 The redesigned buffet line has a sleeker look and is easier to clean than its predecessor. Photo by Wade GriffithNot only has the look of the buffet changed, its functional elements have changed as well. According to COO Jones, with the new solid surface, the chain can warm the buffet items from below with a heat blanket. By grooving the undercounter of the surface, Cici's can keep some areas of the chain unheated.

With this method, the buffet doesn't need to use heat lamps, nor does it have to rely on steam pans for pasta — which means no water (or water damage) and no drain lines, just electrical wiring. What's more, the unit has undercounter holding space, which the chain uses to store backups of items like pasta and pasta sauce.

The unit itself, Jones points out, was designed in close partnership with an equipment manufacturer and is completely modular. While this new, customized design may be more expensive than the previous buffet, the chain has more than offset that increase through reduced construction costs, Jones adds. At a franchisee meeting earlier this year, the modular buffet was "uncrated and put together in three hours. More than likely it will cut three to five days from the construction process. We're not building counters, we're not putting granite in, we're not wiring, we don't have to have drains. There's all kinds of advantages to this." 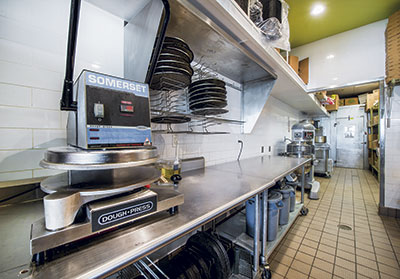 After mixing the dough, staff move it down the line to the dough/stretch table for portioning into balls. Photo by Wade GriffithWhile Cici's front of the house was reworked to strengthen the brand identity, the back of the house was overhauled with efficiency in mind.

For Cici's, the need to streamline the kitchen was evident. Under the previous design, typical locations measure about 4,000 square feet, with a front-back split of roughly 50/50. Two thousand square feet for prep, production, warewashing and storage is far more than the restaurant needs, says Jones. "We've got stores where literally you could drive a smart car through the back room and not touch anything. There's a lot of wasted space, and there are inefficiencies that come with that," he adds.

Under the old design, these inefficiencies could be found throughout the production process. According to Jones, it took 7 to 10 steps to retrieve prepped items from the holding area, 2 to 3 steps each to get to the dough press station and the make table, oven and cut table, and as many as 12 steps to get the finished product to the buffet.

All of this wasted movement was driving up labor costs. In fact, says Jones, a labor allocation study Cici's conducted found that "fifty percent of our labor was allocated against value-added activity. If I'm paying someone $9 an hour, right now I'm getting $4.50 of productive labor. With wage rates going where they are, I have to be in that 75, 80, almost 85 percent range. That's where we're getting with our new design."

This new kitchen design is more efficient largely by matching the flow of the operation much more naturally, while also eliminating several steps along the way. 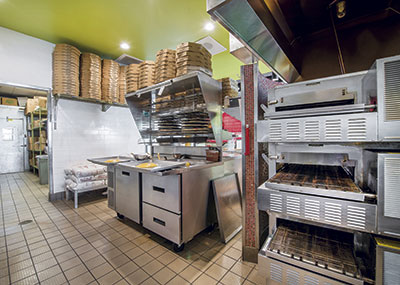 The walk-in cooler sits in the back of the kitchen, adjacent to the pizza prep station. Photo by Wade GriffithThe new food production process really starts with the placement of the walk-in cooler, which holds cheese, meats and vegetables. The cooler sits in the back corner of the restaurant (left or right, depending on the space). Just a couple of steps from the cooler door along a side wall sits the pizza prep station, where kitchen staff wash produce and handle some chopping and slicing, as well as fill up containers with prepped goods.

Following the pizza prep area is the pasta prep station. While the chain previously used a pasta cooker to make pasta, it's switched to induction burners, eliminating the need for a condensation hood required by some municipalities, says Jones. Staff use the burners to boil pasta, rethermalize held pasta and heat pouches of the chain's proprietary sauces.

Continuing down the side wall is a floor mixer. Staff use mixer attachments to slice and grate cheese and some produce. They also use the mixer to make dough in 30-pound batches. After mixing the dough, staff move it down the line to the dough/stretch table for portioning into balls. Staff then move the balls of dough to the cooler for proofing.

When necessary, staff bring proofed dough balls back to the dough/stretch table for pressing and stretching onto racks. The dough table itself, notes Jones, has a polymer cutting board surface, which helps maintain Cici's sanitation standards. 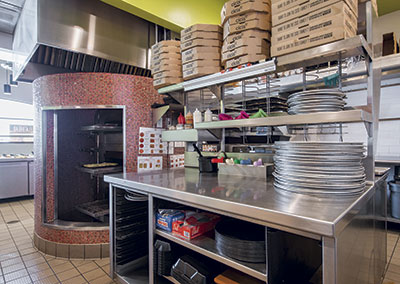 The oven itself is a three-deck conveyor impinger unit, capable of producing nearly 100 pies an hour. Photos by Wade GriffithAfter stretching the dough, staffers turn around and place it on a make station rack. Staffers place assembled pies on a second rack and have 30 minutes to place the pizzas in an oven before tossing them out.

The oven itself is a three-deck conveyor impinger unit, capable of producing nearly 100 pies an hour. While this unit serves Cici's well, the chain is open to testing other ovens that may have an even higher output, notes Jones.

Finished pies land on the cut table which sits at the end of the oven's conveyor. Once sliced, staffers walk them just a few steps to the buffet line.

While Cici's has both a new front of the house and a new kitchen, the two haven't actually been combined in a single store yet. Earlier this year, the first redesigned dining area debuted in a redesigned store in suburban Dallas while the new kitchen rolled out at a location in Fort Worth. The two are set to come together for the first time this summer at a store in Alabama.

Beyond that, the chain expects to open about 25 locations based on the new design each year from 2017 to 2020.

With the bulk of its nearly 450 restaurants being franchised, though, many existing stores will be up for a refurbishment at the franchisee's discretion. To help match the financials of each unit, Cici's has set up a three-tier system for redesigns, says McAloon. These range from about $5,200 for new paint and furniture, up to between $150,000 to $200,000 for an entirely new dining area, buffet and kitchen.

Several franchisees, says Jones, have expressed a strong interest in redoing their locations. Much of their motivation, of course, is financial. The first location with the redesigned dining area is seeing double-digit sales growth year-over-year, with no marketing behind it.

The appeal, though, lies not just in the financials, but also in bringing existing stores in line with customer expectations, as well as their own.

"There's a pride factor," Jones says. "It's 'we're not just commodity feeders. This looks and feels like a restaurant. It's something that I want to have that I can be proud of.'"