A New Generation of Grease Receptors is Born

Foodservice operators have more options than ever when buying and installing grease interceptors, but that wasn’t always the case.

The choices were few and certainly not optimal — either deal with the maintenance issues involving a smaller, internal unit or find the space and invest in a large exterior concrete tank.

A necessary inconvenience, some operators thought. 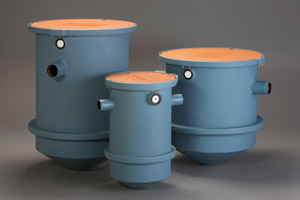 Today’s trends include more compact, efficient alternative grease interceptors that offer increased flexibility for placement and use. But not unlike many product innovations, the next generation grease interceptor was, in some ways, an accidental invention.

Bill Batten has been with Thermaco, a grease trap manufacturer based in Asheboro, N.C., since 1983. He tells this story:

“We evaluated more than 30 baffle arrangements following a meeting for the redesign of another grease trap line,” Batten says. “Our goal was to create a product with a small footprint but having substantially more retention capacity than traditional grease interceptors.”

Enter Trapzilla, an innovative, highly functioning and adaptable grease interceptor, developed after months of development and testing. Trapzilla is a state-of-the-art system featuring a new baffle design that accommodates three times as much retained grease in a smaller footprint, compared to a traditional trap.

Trapzilla is compact, the largest being 36 inches in diameter, so placement isn’t a problem. Foodservice operators can place the new grease interceptor system in floors, ceilings or underground, indoors or out. Trapzilla is light – the largest weighs just 130 pounds – so it’s easier to install, as well.

Trapzilla is round, in contrast to the rectangular or square design characteristic of earlier grease interceptors, thus increasing the unit’s strength by redistributing forces around the ring. Round shapes provide significant “hoop strength” advantages and resist bowing inward or bulging outward. Trapzilla provides four times the trapping capability of traditional grease interceptors, as each unit carries up to 150 gallons per minute.

Built with high-density polyethylene, the next-generation system provides an indefinite lifespan and won’t deteriorate, as is the case with steel and concrete models.

“Because of this system’s design, it provides operators with a super capacity and flow rate,” Post says. “We had one installation that had a 40-foot drop, which is a heck of a swallow for a grease-trap system. We were amazed at how much this system could accommodate. It has been the perfect solution.”