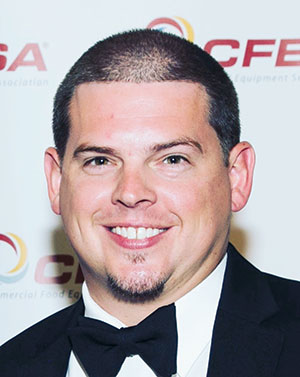 Like a lot of change agents, Cribb comes from outside the sector. Most of his career experience prior to joining SAM was in banking. Starting out as a teller at a community bank straight out of high school in 2002, he worked himself up to consumer lending officer and branch manager by 2008.

Then the great recession hit, wiping out Cribb’s job, and his identity along with it.

This, Cribb says, started a dark period in his life. “I didn’t know who I was when I lost that job. The economy was terrible and I was picking up all these odd jobs here and there, feeling like a failure. I found myself turning to drugs and became addicted to opiates ... For three or four years I completely screwed off in my life with that addiction.”

With the help of family and friends, Cribb eventually accepted he had a problem. He checked into rehab, entered recovery, found religion and got involved with his church. It was through volunteering at this church that he got involved with SAM.

Curt Scott, CEO and founding partner of SAM, happened to be a volunteer at that same church. Impressed by Cribb’s natural charisma and leadership skills, Scott offered Cribb a dispatcher job paying $10 an hour. Still seeking stability, Cribb accepted the job, and he quickly found himself with a lot of responsibility, including improving several business processes like customer service standards, billing and scheduling.

Soon, Jim Eason, now SAM’s vice president, saw that Cribb could be a real asset and leader for the company, someone with the ability to lead with passion and inspire passion in others, paired with solid business skills honed by his time as a banker. “I’ve always found myself in leadership positions, whether it was on the basketball court in my neighborhood growing up, as class president in high school or at the bank quickly working my way up,” says Cribb.

In 2014, just a year after joining SAM as dispatcher, Cribb approached the company leadership with a request for more authority, including the power to hire and fire, and start building a more responsive culture. Cribb’s approach worked. With SAM thriving, he was made president and COO in 2016.

Cribb and the rest of the leadership team implemented five core values that the company hires, fires and operates by. These values together emphasize clear-eyed honesty and dedication to a job done right.

SAM’s first value is simple and essential for any firm to survive and thrive: Execute quality work. To that end, the company is one of only four in the state of Georgia to have earned CFESA Certification, which requires rigorous ongoing training of field staff.

The second: Earn trust through clear and candid communication. “In my South Georgia terms, we’re straight up,” says Cribb. “If you’re doing something great, we tell you and if you’re not we’re going to let you know that too. That’s with our customers and our co-workers.”

The third value is that the company and its employees should all know their limitations. If a major chain called and offered SAM a massive contract that it simply couldn’t handle with its 22 techs, says Cribb, it wouldn’t just sign the deal and then figure it out. The firm would start a dialog about what it could do and possibly reach out to other CFESA companies about working together on such a contract.

SAM’s fourth core value is its dedication to learning and growing. The company and its employees are always looking to improve, whether in business processes or technical know-how.

The final core value, Cribb says, is working with joy. Joy, he notes, doesn’t equal being happy. “I can be frustrated at work because I have a whole lot to do, but I can have joy at work because I have work to do. I’m grateful and thankful that I have something to do and I’m able to use my talents, my skillset.”

These core values aren’t the only factors in SAM’s growth, Cribb says. The company has also been driven by its Big Hairy Audacious Goal (BHAG), a concept taken from the book “Good to Great” by Jim Collins. In 2016, shortly after he became COO and when the company had around 15 employees, Cribb and the leadership team developed SAM’s BHAG: 125 employees by 2025.

Hitting this is a matter of disciplined goal setting, Cribb says. The company is working through a series of three-year plans to reach 125 employees. Each plan divides into one-year goals and each yearly goal is further divided into quarterly targets, all covering metrics like revenue, margin and headcount, as well as the strategy and tactics to hit these numbers. If SAM achieves 80 percent of its quarterly targets, it will hit its yearly goals. Hit 80 percent of its yearly goals and it will make its three-year plan. Achieve its three-year plan and by 2025 SAM will be a 125-employee company.

While setting these goals is a job in itself, staying on track to meet them becomes a separate challenge. The company’s leadership team, which includes Cribb, Eason, Scott and founding partners Allen Alligood, Bill Moorhead and John Moorhead, hold weekly meetings to monitor the firm’s progress and address any challenges that arise. Those meetings often make use of the company’s value of clear and candid communication.

“Every Tuesday morning starting at 6:30 we’re in the conference room for an hour and a half ... We’re getting after it, staying on track and having healthy conversations and conflict in that room,” says Cribb.

This approach has been working. Since implementing this plan in 2016, SAM’s topline revenue has grown by at least 40 percent each year.

While managing this level of growth is enough to keep him busy, Cribb has found time to become an active contributor to the equipment and supplies sector. He currently serves on the board of directors for the Commercial Food Equipment Service Association (CFESA). Though Cribb readily acknowledges that there’s a lot he doesn’t know about the industry, he hopes to help the organization with his skillset and offer a different way of looking at challenges. “I’m the youngest guy on the board at 35 years old ... I’m not the typical Millennial that everyone bellyaches about, but I am a Millennial nonetheless. The world I was raised in impacted me in a different way than it did [other board members], which offers me a fresh perspective on a bunch of different situations.”

Cribb’s giving back extends far beyond CFESA. He remains an active member of his church and volunteers at the rehab center that helped him, Penfield Christian Homes. He speaks with others about the challenges they’ve all faced and how he’s been able to turn his life around.