It's a good day if you're working — or chillin' — with Chuck Day. Clients can count on him for his sense of urgency and followup, while friends enjoy his funny jokes and upbeat personality. Actually, that's why many of his clients also count Day as a friend. 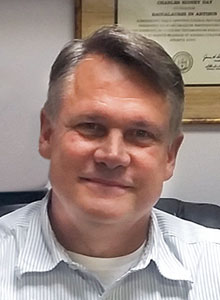 Chuck Day, President, Manning Brothers Food Equipment"I have known and worked with Manning Brothers and Chuck for over 20 years and whenever I hear that Chuck is working on a foodservice project I am relieved to know that the project will be handled professionally and on time," says James Camacho, FCSI, CSI, principal of Camacho Associates Inc., a foodservice design firm in Atlanta and Charlotte, N.C. "Recently when working on a project, Chuck went out of his way to make sure the client was totally satisfied." Literally — he hoisted equipment through windows and even managed to transport equipment in an elevator so small that pallets wouldn't fit.

That's the thing about Day — he's there for you when you need him. Whereas some companies might take days to respond to inquiries, Day always picks up the phone and if a job can be done right away, it's done. "It sounds so fundamental but returning a phone call or email is everything," Day says. That's the I-need-it-yesterday approach many operators employ.

Starting out on the operator side and later working as a designer and sales rep for a fabricator before joining and eventually buying Manning Brothers only sharpened this "customer always comes first" attitude.

A history major from Rhodes College in Memphis, Tenn., Day went the restaurant route first as a young man, starting as a manager for Wendy's in 1978. Fast forward 37 years and he wouldn't think about working in any other industry but foodservice. "This is one of the few industries where you can directly affect people's lives," Day says. "Restaurant owners come to us with their savings and look to us to help them achieve success."

In a testament to his operator days, Day addresses new projects by examining the food first. He says, "I always ask first what's your menu? Is it barbecue? Chicken? How are you going to cook it?" This approach also comes from experience in design and engineering.

In the 80s, Day moved to Atlanta to work for a sheet metal fabrication company where he learned all aspects of the job. "I learned to weld, grind, polish, scribe, notch and everything else you can do in fabrication," Day recalls. Then one day he was offered the opportunity to write estimates for the company, so Day learned and excelled at that, too.

In the '90s, just before the Olympics took place in Atlanta, Norman Silver, then the head of engineering for Atlanta Fixture, approached Day about a job. He took it and again helped out in all areas — engineering, sales, and design. Day would realize later that Silver was his first and most influential industry mentor. "Everyone loved Norman because he took care of his engineers," Day says. "You could have screwed up really badly, but he would support you and work with you hand in hand to fix the problem first and foremost."

When the Olympics landed, Atlanta Fixture was busier than ever. It was during this time that Day got his feet wet selling foodservice equipment. He credits his friend, Jim Meyers, with showing him the walk-in cooler ropes.

Then in 2000, Stewart Manning called. An industry colleague while at Atlanta Fixture, Manning finished overhauling his company — moving to a brand new building, upgrading the dealer's technical infrastructure. Day joined the company a year later.

"Knowledge is great, but applied knowledge is what makes you different," Day says. "It's sort of like you learn there's going to be a flood but you don't do anything about it. The world is only going to get more digital."

Today, he's looking at building information modeling as the next step. And he's working on improving the online sales site as a value-added service for his customers, particularly the chains that often want to quickly fill replacement or smaller orders online through a password-protected service.

Just like at Atlanta Fixture, Day would go on to fill every job at the company, including fabrication, design, layout of equipment, sales, installation and management. Then, in October 2009, Manning offered Day the option to buy out the company. And he did it. Looking back, Day admits he balks at the decision to buy a company during the height of a recession.

"But here we are in 2015, and we're still cranking," says Day. At $16 million in revenues last year, that's an understatement. He credits Manning for teaching him to stay focused and tackle projects head-on, a continued sense of urgency and responsiveness he learned from Silver.

Optimism and a positive outlook helped too. So does a good team. "In this industry you have to have a good banker, a good attorney, a good insurance guy and a good accountant," says Day, who learned to quickly fill all those needs and then some. He also hired new people — Manning Brothers currently employees 29 including its gregarious owner. "You're only as good as your own infrastructure."

Chains get that — and that's partly why they've been the big driver for the company. Zaxby's, for one, started as a small restaurant 25 years ago and now has nearly 650 stores and more than $1 billion in sales. Manning Brothers works with the chicken chain on rollouts, new store replenishments, remodels and more. Manning Brothers also works with some regional chains that have expanded as of late.

With chain work, maintaining inventory becomes critical, too. "If their fryer goes down, by gosh, they need another fryer pronto the next day," Day says. "I'm still a brick and mortar guy and believe in having a well-stocked warehouse. But I also made a commitment with favorites to make sure new equipment can be readily available."

Outside of the office, Day remains active with SEFA, the buying group his dealership belongs to. He's even attained SEFA Pro status for his training activities and is a champion for training younger generation newbies. This makes sense — training comes naturally for the certified American history teacher. Day's forever grateful to the coaches at SEFA who trained him on equipment, but looks to constantly learn more and give back.

Day also works with young culinary students to train them on the next generation of equipment, like induction burners and combi ovens. On the flipside, "We're also training our people to learn more about the culinary arts," he says. Lately, Day says he's seeing more opportunities to learn about energy efficiency and helping clients make better decisions so they can save money — and cut down on their carbon footprint. Some people want the nuts and bolts, he says, but the chains have become more interested in how to use less fryer oil, less water, less energy.

"I don't think this focus on sustainability is going to go away — it's only going to get stronger as water, waste and food costs continue to go up," he says. "Look at Europe — they can feed hundreds of people in a postage stamp size of a kitchen."

Paying attention to health and freshness is just as important, and those culinary students he works with are leading the way. "The 'think globally act locally' concept really resonates with them," he says. "We need young people who are smart, computer savvy and can get out there. I never want to get too complacent."

At home, he's certainly been anything but — recently shedding more than 10 pounds from eating healthfully and working out with his sons — Charlie, 26, and Harrison, 16, a wrestler. Day lives in Dacula (without the 'r'), Georgia, with wife Renee, and they also have a daughter, Angela, 37, and granddaughter, Autumn. And, because he doesn't have enough to do, Day, a talented tenor, enjoys performing in local competitions and other venues. Friends say he can sing Luciano Pavarotti's 'O Sole Mio with the best of them. He's working on the 95-page German Requiem by Brahms next.

In the meantime at Manning Brothers, he'll make sure to answer calls, make his team happy, stock inventory and empty out the parking lot. "My goal is to not see the trucks in the back of the yard — if my trucks are on the road I'm a happy guy." And to answer your question, he's happier than ever.