This $30.5 million facility replaced a problematic operation with a practical central kitchen with flexible production systems that can grow as the population increases, earning it the highest honor in FE&S' Facility Design Project of the Year competition. 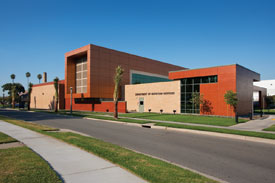 The cook-chill liquid-cooking pumpable system is recessed into a 30-inch-deep pit for ease of loading kettles. Menu ingredients are placed in baskets and lowered into one 100-gallon and two 150-gallon tilting kettles. Photo courtesy of State of California, Department of General ServicesTogether, the central kitchen and renovated rethermalization kitchens at Metropolitan State Hospital (MSH) in Norwalk, Calif., represent a foodservice operation unlike any other state facility. And it needs to be that way to meet the unique needs of the hospital's population.

Metropolitan State Hospital serves a population of patients who have a variety of mental illnesses. Some have been accused of crimes but cannot stand trial because of their mental health issues. Staff at the facility assist these individuals in their recovery by offering rehabilitation services to prepare them for community living.

The project conception and initial planning began in 2002 to replace a deteriorating building. Rising oil prices and state budget shortfalls delayed the project until it was bid out for the second time in 2008. The $30.5 million project, which finally opened in July 2009, included $20.5 million for the construction of the kitchen and renovation of the satellite kitchens. The equipment investment was $5.5 million.

"For the entire system, we brought in all-new equipment except floor mixers and a few carts," says the food facility consultant, James Donahoe, principal and senior designer at Webb Foodservice Design.

The project essentially changed the business model for the facility. The new 27,000-square-foot kitchen houses the Department of Nutrition Services Administration staff as well as food preparation and food storage areas. The kitchen prepares 2,100 meals per day spread across three meal periods. It also provides food for nutrition breaks. The kitchen has the capacity to serve up to 6,000 meals per day.

The judges noted that the project team successfully understood the goal to be accomplished and managed the transition well. They also were impressed that the project successfully replaced an inefficient operation with a facility that functions in half the physical space and doubles the meal production of the previous operation. In addition, they admired the on-site placement of the facility and kitchen areas, which will allow for future expansion with limited impact to the operation and sustainability footprint.

In summary, the innovative equipment design approach to ensure high food quality, costs and consistency is possible for a number of reasons:

In addition to labor-cost savings, the new operation realizes other savings that total tens of thousands of dollars annually, including:

According to Tamer Ahmed, state project manager for the California Department of General Services, "This is the first cook-chill kitchen in the state of California to receive this LEED gold certification distinction."

"The ability to achieve LEED certification for an operation of this size is a wonderful accomplishment and a complicated process that requires extensive planning," says Jim Webb, principal at Webb Foodservice Design.

The project team is pleased with the overall efficiency of the foodservice operation. "Staff never has to backtrack from delivery to dish- and cart-washing and trash removal," says Chris Elder-Marshall, MA, RD, who was foodservice director at the facility for 20 years until her retirement in October 2010.

After the project's completion, the team produced a lessons-learned document that included recommendations such as adding 20 square feet to the prep room and perhaps 10 feet to the back dispatch dock to eliminate congestion. Another challenge was writing specifications that weren't too generic but allowed three manufacturers to bid based on the state's requirements.

In summarizing their selection, the judges said, "This project is different for its genre and magnificent in its difference." With all this documented information about the equipment and other facets of the kitchen, this project's design and operational methodology will likely serve as a model for future California Department of Mental Health kitchen projects.

2012 Facility Design Project of the Year, Honorable Mention: Q on the Riverwalk at Hyatt Regency,San Antonio