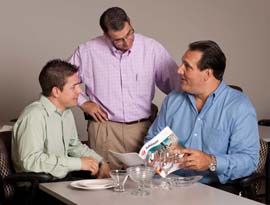 Mike Perrino (right) reviews a few product samples with Curtis Schatz (left) and Mark Garoufalis. When it comes to ordering samples, Perrino always makes it a point to request a second one to make sure he can meet any unanticipated customer needs.
Schatz joined the North Riverside, Ill.-based dealership in the spring of 2008, immediately after graduating from Illinois State University with a bachelor's degree in marketing and sales. "I came to Edward Don & Company by chance," Schatz recalls. "I was looking at a job in insurance but had also posted my resume on a job board at Illinois State. Someone from Edward Don & Company called me for an interview. I asked one of my professors who had some restaurant experience about the company, and he had nothing but good things to say about the company."

Like most Edward Don & Company sales associates that are new to the industry, Schatz spent his first three months with the company in a training program. Upon Schatz's completion of the program, Perrino approached him about joining the multi-unit sales group. So Schatz spent a year working with Perrino's partner Jim Pope. And when Pope retired in November 2009, Schatz became Perrino's operating partner in the multi-unit sales group. Today, Schatz has some accounts of his own but generally works in close collaboration with Perrino.

Naturally, constant communication is critical to Schatz's success and that of the group, which is why he and Perrino talk first thing in the morning and at the end of each business day. "There is so much to learn, and working with Mike is like hopping on the fast track," Schatz says.

Of course, most people entering the foodservice industry during such a challenging business environment would consider their timing to be a little off, but not Schatz. "To me, the dark cloud hanging over the industry right now has a bit of a silver lining," Schatz says. "If I can start at the bottom and scratch and claw my way to the top, well, that's a good learning experience for me."

While clearly young and energetic, Schatz also seems to embrace learning opportunities when they present themselves. For example, once a customer called Schatz to place an order, and he referred that person to another staff member. Perrino was quick to point out that a good supply chain partner can never be too busy to address a customer's needs. "If one of our customers is calling us to place an order, there is a reason for it," Perrino says. "So we have to take the time to not only take the order but to understand what initiated the call."

Once Perrino made his coaching point, Schatz understood the lesson and took it as part of the maturation process. "Working with Mike and such high-profile clients, I have to project an image that I have been here a lot longer," Schatz says. "I had to go from being a college kid to an adult rather quick."

As a result of this example, Perrino has helped cultivate a sense of urgency that permeates the way Schatz works with clients. "You have to recognize the opportunity and take advantage of it," Schatz says. "High- profile clients — like the ones we have — don't come around every day. So you have to take advantage of the opportunities presented to you or someone else will.

"And vendor relationships are huge, too, because they can help you correct a situation for a customer with a simple phone call," Schatz says. "I want to make sure the customer has to do as little as possible to make the situation right. As Mike likes to point out, anyone can take an order —it's what you do after that makes a difference. That's why follow up — tracking the order, checking pricing, accuracy of invoices, etc. — is the name of the game. When I first started, that was the hardest thing for me to understand."

Schatz also appears to have latched on to Perrino's very casual but extremely focused style. "My favorite part is going to see the customer," Schatz says. "We meet with people first and get to know them before we start to do business with them. And that relationship becomes more like a friendship, and as a result everything seems a lot less like work. Having a relationship with your customers is important because when you have a relationship with someone, they are not afraid to tell you when a mistake is made. It's when you don't have a relationship that people don't tell you about your mistakes. They just take their business elsewhere, and you don't have a chance to correct what went wrong."

Similarly, Schatz credits both Perrino and Mark Garoufalis for helping him learn how to build internal relationships with colleagues that work for Edward Don & Company. "The thing that impresses me most about Mike and the rest of our team is their customer focus," Curtis says. "We are able to get things done internally and with our vendors, but everything we accomplish has to be right for the customer for us to keep the relationship. We could not do the things we do on the scale we do it without the internal support we have. You don't learn that in college."

Schatz may just be starting out in the foodservice equipment and supplies industry, but he feels as if he's found a vocation. "I don't think anyone while growing up says they want to go into this business unless they have family already in the industry," he says. "But once you are in this company and this industry, you are in it for good. To see the passion people have for this business is inspiring. So many people just go to work and hate their jobs. This is not a job for me but a career, and we have really only scratched the surface.

"Mike has been more of a mentor to me, but we are working toward becoming more equal partners," Schatz continues. "And I look forward to doing my part to grow the business when the time is right.

And it would seem that Schatz, Perrino and the entire multi-unit sales team are ready to transition together into a new phase of business. "The past few years have been all about holding on to your customers, but now we can see the light at the end of the tunnel," Schatz says.